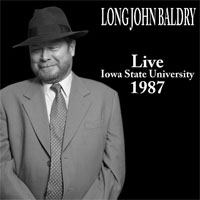 JOHN WILLIAM BALDRY better known as LONG JOHN BALDRY due to the fact he was 6ft 7in was gifted with a deep rich voice which was ideal to sing Blues in the growing UK blues club scene in the early 60′s where he made an immediate impact.

He achieved significant commercial success around the world with ‘Let The Heartaches Begin’ in 1967 and also with ‘You’ve Lost That Lovin Feeling as a duet with KATHI McDONALD in 1980.

He moved to Canada in the late 70′s until his untimely death in 2005. His deep voice was also utilized as the voice of Dr Robotnik in the ‘Adventure Of Sonic The Hedgehog’.

This album was recorded in 1987 at Iowa State University and is a testament to a phenomenal musician of his genres of Blues, R&B and Rock & Roll