LINDA HOYLE – Pieces Of Me 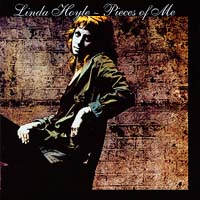 One and only solo album from 1971 of former lead singer of Affinity. Remastered with unseen photos from Linda’s personal album and notes by Linda and Mo Foster, on vinyl this album changes hands at a cool £150 a copy!

The all-star band features Chris Spedding, John Marshall,Karl Jenkins and Jeff Clynne most of whom were members of Ian Carr’s Nucleus.

...this prog-era curio...is sure to be favourably received by those unwilling to part with a three-figure sum for an original copy.

Her powerful voice is very much in the Maggie Bell/Jo Ann Kelly mould...and she is more than ably supported by an excellent band of musicians...

Altogether a quintessential piece of 70s Rock from an era when albums of this quality were the rule rather than the exception.

It is an interesting album, thoughtful and provoking, and one that is worth seeking out…

…an 11-track set that pursues Affinity's affinity for jazz-rock and includes Hoyle's own recollections of the songs and the sessions within the accompanying booklet.

Hoyle and writing partner Jenkins(keys) crafted impressive, progressive rock/jazz numbers of considerable power and nuance. No wonder the vinyl of this is/was so collectable, it's bloody good.

…she pays a vocal tribute to many of the great blues singers who inspired her, including Bessie Smith, Mildred Bailey and Laura Nyro…And damn fine it is too!

…music that was ambitious and personal, rather than calculated to appeal to the masses. Hoyle sings impressively…Jenkins' arrangements are imaginative and satisfying. Spedding's vicious, menacing solo on Nina Simone's 'Backlash Blues' is outstanding.