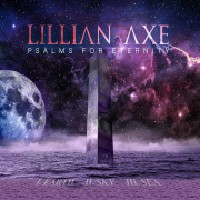 Originally formed in 1983, the group is still active – both guitarist Steve Blaze and bassist Michael Max Darby remain from the original line-up.

Psalms For Eternity brings together, for the first time, tracks from all Lillian Axe releases in one comprehensive anthology.

All tracks were selected by Steve Blaze himself, adding in several unreleased tracks, making this an essential part of the Lillian Axe discography.

The band maintain a loyal following worldwide and tour frequently.

Steve Blaze was recently inducted into the Louisiana Music Hall Of Fame.

Psalms For Eternity comes in a deluxe 3 CD digipack.