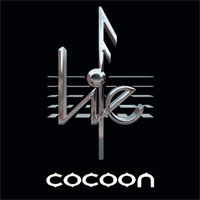 LIFE was the brainchild of renowned guitarist, vocalist and producer ROBIN GEORGE and this album was recorded in 1995 and released on a small independent label in 1997.

Vocalist NICK TART (DIAMOND HEAD) initially met up with Robin in 1992 and the seeds of this Life album were borne out of that initial meeting ‘Cocoon’ is a heavy commercial sound and the recent remastering by Robin of the album takes it to a whole new level as well a bonus tracks being supplied by Robin.

Crank up very loud and enjoy!

Definitely one for fans of Robin George's music and those who enjoy big production, melodic hard rock albums. Damn shame this wasn't a bigger hit on its original release although hopefully this re-release will go some way to make amends. 4/5

The group toured intensively recording this album along the way, but in the times of grunge reign this kind of melodic hard rock, fashionable half a decade earlier, didn't find a listener, yet now, in expanded form, it proudly stands its ground.

Sadly, Life's life wasn't long - "The End Of The Line" bids farewell on an exquisite acoustic passage - but with George still active and Tart fronting Diamond Head, "Cocoon" has both historic value and emotional zip to be viable in this day and age. 3/5

There are tracks equalling the best of Red Hot Chilli Peppers...or Alice Cooper...This is an album without fillers.

This is a diverse album that reminded me in parts of Tom Petty, Bryan Adams or Bad Company...

The anticipated quality is there from the start...Thankfully Angel Air has once again given an otherwise lost album an outlet...

Listening to this now it is clear that Robin's hard edged, yet commercial approach, for Life deserved much better. Fortunately Angel Air has embarked on a series of timely Robin George re-releases, re-mastered, as in this case, by Robin himself.

...brimful of sharp hooks...every track here is accessible, immediate and capable of fulfilling the dreams of the most exacting melodic rock fan.