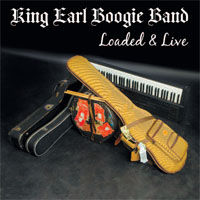 The original King Earl Band was created by Paul King and Colin Earl, both founder members of MUNGO JERRY. In 1996 Paul retired from the band and Dave Peabody joined to replace Paul.

The King Earl Boogie band is a spectacular fusion of some of the best musicians in the UK today.

...a ferocious live document...that captures the King earl Boogie Band in all its majestic boogie-woogie glory...the blues the way it was meant to be played...

This set features some pretty mean fusion of blues and boogie. Money To Burn is a strong opener, and the pace is maintained throughout with numbers such as 'Matchbox', 'Jelly Roll Baker', 'Slow Down' and 'Big Road'.

The stand out track however, is a storming rendition of the Juicy Lucy hit 'Who Do You Love'.

This is definitely a CD if you want to just have a good time.

It's a good mix of original numbers and covers all led by the boogie piano playing of Earl who really is a master of this style of piano playing. The classic 'Who Do You Love' gets a run out whilst 'Blue State Slide' allows guitarist Dave Peabody to show off his classy slide guitar playing.

Treat yourself, catch this band live because they love what they do and if you can't then this is the next best thing, a brilliant blues boogie band doing what they do best

...there's a sense of honesty and an uplifting sense of fun present...that suggests there's considerable life in these old dogs yet.