JOHN FIDDLER State Of The Heart 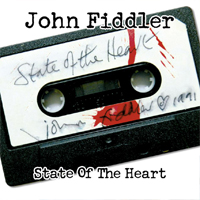 JOHN FIDDLER singer/songwriter from MEDICINE HEAD released his first solo album in 1991 following the demise of BRITISH LIONS in the 70′s and BOX OF FROGS in the 80′s both of whom he fronted . His solo album was released on cassette only as a marketing ploy called “State Of The Heart”.

John had a call from his management company asking if he would like to join The STRANGLERS so he started writing songs with them in mind “Hearts Of Fire”, Blue Skies” and “When I Looked Away”. The guys in The Stranglers then decided they wanted to write themselves and go down a different road with another singer so John continued writing and “State Of the Heart” was the result of his desire to write cool songs.

Long out of print the album has been remastered and includes some classic numbers which are today part of his live set “Strong Heart” and “Only The Roses”.

This album has been in the vaults for many years so this is the first time in a very long while that many folks will hear it. These tracks receive the (always impeccable) Angel Air remaster treatment...and will undoubtedly whet folks' appetite for the rest of Fiddler's solo catalog. Smart guitar-driven pop cuts include "Strong Heart," "Time Will Tell," "Sex in the 90s," and "Where's Heaven Now?"

Even the simplest pop cuts, such as the synth-skanking 'Hearts Of Fire' or the organ-riding 'Only The Roses', have a magnetic undercurrent to them, whereas the harmonica-aided 'Everybody Has the Blues (Sometimes)' and finale 'Where's Heaven Now' see John back on the HEAD track.

That's where his heart lay, obviously. A chameleon may change his colors but not his shape. A worthy addition to the Fiddler catalogue. ***4/5

State Of The Heart is a musical slice of mood, emotions, and finely tuned texture and flavours. Enjoy with a glass of chilled rose and a box of bitter-sweet chocolates.

Even with this album from 1991, Fiddler doesn't have a problem convincing us with material he wrote during the late '80s to 1991. The most convincing part of it is the music and the story behind each song which takes you on a free ride.