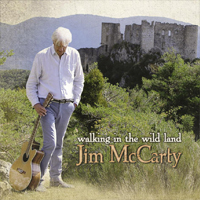 JIM McCARTY is the renowned drummer from THE YARDBIRDS who is respected worldwide for his innovative drumming style which he introduced into music in the ’60s on hits such as “For Your Love”, “Heart Full Of Soul”, “Evil Heated You”, “Shapes of Things” and “Over Under Sideways Down” – all of which were UK Top 10 hits.

When The Yardbirds broke up in the late ’60s Jim formed a number of successful bands over the next 25 years including RENAISSANCE, SHOOT, BOX OF FROGS, STAIRWAY and ILLUSION before reforming THE YARDBIRDS in the ’90s, whom he still tours with today.

“Walking In The Wild Land” is Jim’s third solo album and features his songs and vocals in wonderful psychedelic/folk rock style.

Relaxing ballads, traditional atmosphere, and light rock denoting a blessed idleness allied to an undeniable musical know-how...A happy recording, calm and beautiful, sung without excess and with beautiful, confident melodies... No title really stands out from another, no hit, just beautiful songs. Fortunately, albums like this one are still being released.

...'Changing Times' sounds very relaxed. A folky ballad in which stately strings play a pumping role and in which a light psychedelic atmosphere hangs. The same psychedelic 60's atmosphere is also present in the ballad 'Mountain Song'. A song in which, if you listen carefully, you can hear some Eastern influences. 'Right On The Road' has a high Gerry Rafferty level. A ballad with a beautiful steel guitar in the background...

Guitarist Alex Lifeson, from the band Rush, is a guest on the folk-pop song 'Soft In A Hard Place', in which he disrupts the soothing atmosphere with a splitting guitar solo. Through the whirling piano in 'Dancing Leaves' you can indeed see the leaves languidly dancing in a song that reminds us of the trio America in terms of sound. 'Stop Living Life In The Past' is a folk-pop ballad in which everything is just right. The soothing instrumentation, the pleasant voice of Jim and a very catchy melody. 'In The Clear' describes when joy and relief meet you. A number in which the relief after hearing a positive result at the doctor is well worded.

In 'Connected' we go on the 60's pop tour with nice pumping piano and a sound that goes back to, for example, a band like Procol Harum...

...I feel presently that this, the third release attributed to him alone, is a strong contender for the finest he's created in any of his incarnations. Even a determined adherence to moderato throughout enhances rather than detracts from the intrigue. One of its minor attractions is how the obviously autobiographical tracks prompt guesswork as to their subjects, especially if you've a glimmer of McCarty's personal history.

While 'In The Clear' and 'Charmed' touch, respectively on medical matters and vicissitudes of a travelling life, it was necessary to ask him directly whether 'Right On the Road' addresses the late Keith Relf. Elsewhere, the lyrical ruminations, instanced by the enchanting melancholia that is 'Dancing Leaves'.

...'Charmed' has a haunting trumpet, 'In The Clear' verges on late 60's acid-folk-pop with its flute and hum-along riff, 'Come Around The Corner' has gospel harmonies while 'Connected' is almost a pop track. All the while McCarty's vocal are echoey and distant, as if he's gazing a the sunset on the far horizon. It could all have gone so terribly wrong but he manages to keep everything in focus, creating an understated gem.

It's a pastoral album; folkier than not, more acoustic than anything else, and the accompanying booklet, with its vivacious vignettes of wildlife and wonder, matches the mood as perfectly as the music and lyrics. So, if the occasional song (the life-on-the-road but-not-weary "Charmed," the salutary "In the Clear," the admonitory "Stop Living Life in the Past") do break that spell a little, it's only so they can weave a fresh one.

And in between times, "Dancing Leaves," "Mountain Song" and the opening title track in particular imbibe Walking In The Wild Land with a genuine sense of good fortune - ours', that McCarty should have chosen this path when others no doubt seemed a lot simpler.

...Of course, he's much more in awe of nature - the mantra of "Mountain Song" and transparent balladry of "Dancing Leaves" testify to that in a mesmerizing manner, whereas the solemn "Come Around The Corner" finds Jim looking for the next different sight, and "So Many Questions" welcomes mystery into an ordinary life, the life McCarty's up for at this day and age. "We're held into this state that is so tightly cast": that's not for him anymore, as he's "free of all pretences" after fame and fortune proved not the precious things in the world, which is why "Walking In The Wild Land" has gravity and wonder in it. 4½ / 5 Stars

These tracks sound fresh and inspired, particularly when you consider Mr. McCarty's long and involved musical career. Interesting that the album was recorded at Toronto's No. 9 Studios, because the overall sound reminds us of some of the more current Canadian artists in the twenty-first century. Jim's voice is sounding mighty impressive these days. He's got a super smooth delivery that is immediately inviting and genuine. Whether you're familiar with his past bands or not, if you like smooth acoustic guitar driven pop you're almost certain to appreciate these tracks. Cool melodic cuts include "Walking in the Wild Land," "Mountain Song," "Soft in a Hard Place," and "Come Around the Corner."

With a huge catalogue of work behind him, it would be easy for drum legend Jim McCarty to simply rest on his laurels and hark back to days of yore. Instead he's taken some classic themes and invigorated them with an enthusiasm and love of the here and now. It may be gentle and soothing for most of its duration but when Jim McCarty goes Walking In The Wild Land, it's a trek you should join him on, every step of the way.

The album is bookended by two of its strongest numbers: 'Walking In The Wild Land' and 'So Many Questions'. The former celebrates a "wild land", free of all pretence while the latter bows out, questioning if wisdom and experience really are related. Equally worthy of a mention is the slightly foreboding 'Changing Times', the psychedelic 'Mountain Song', the autumnal 'Dancing Leaves' and a simple warning to the listener: 'Stop Living Life In The Past'.

Relaxing ballads, traditional atmosphere, and light rock denoting a blessed idleness allied to an undeniable musical know-how...A happy recording, calm and beautiful, sung without excess and with beautiful, confident melodies... No title really stands out from another, no hit, just beautiful songs. Fortunately, albums like this one are still being released.

'Walking In The Wild Land' is Jim's third solo album and features his songs and vocals in a psychedelic/folkie style.

Yardbirds drummer Jim McCarty has arguably never received the recognition that he deserved for his innovative contributions to rock classics such as "Shapes of Things," "Over Under Sideways Down'" and "Happenings Ten Years Time Ago," and the veteran musician is still striving manfully to keep the band's name alive despite being well into his seventies now. Jim's third solo album serves up an agreeable batch of songs in a gently psychedelic folk rock mould, with his old Renaissance sidekick John Hawken lending a hand on "Right on the Road" and "Connected," and Rush's Alex Lifeson chipping in on lead guitar on one of the stand-out tracks, " Soft in a Hard Place."

Forget Jim McCarty 'The Yardbirds drummer' and switch to Jim McCarty the guitarist, composer and singer because it's this Jim McCarty who has just released his third solo album. He wrote all twelve melodic, quiet, almost fragile songs in which he contemplates about nature, life, time, destiny and the questions that must remain unanswered forever. The philosophical mood of this album is further enhanced by instruments such as the flugelhorn and the violin. A lovely antidote.

The former Yardbirds drummer and founding member of the original incarnation of Renaissance releases his 3rd solo CD at a time of life when most people have adopted a more sedentary lifestyle...these compositions are closer in feel to the folk-rock leanings of Renaissance. In places it feels like early Kate Bush...