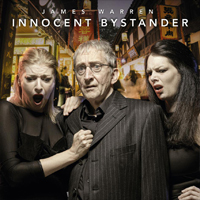 JAMES WARREN found fame and fortune as lead singer with THE KORGIS and wrote and sang their worldwide hit “Everybody’s Got To Learn Sometime”. As well as founding The Korgis, he also co-founded STACKRIDGE who recently performed their last ever live concert.

Now 65 years old with his one enduring love since acquiring his first guitar at 14, melodic pop music, he has written and produced a new album of unashamed catchy tunes and singalong choruses, decidedly retro in flavour with playful nods to the songwriting idiom of his youth. Possibly irrelevant but decidedly not irreverent.

The lyrics are all out of the '60s - "That's What You Do To Me "and "You've Got The Love That Matters" are typical titles. Warren plays all the backing tracks, leaving the decoration to his guests and he proves to be a very efficient drummer along with everything else he does...an enjoyable album of pop nostalgia.

The orchestrations are of top quality...James does not forget his roots with 'That's What You Do To Me', very influenced by SPENCER DAVIS GROUP. We are back in the sixties, the organ hums with happiness as well as the brass. He reaches the summits of pop with the wonderful 'You've Got The Love That Matters'...This album was co-produced by David Lord having worked with Peter Gabriel, XTC, ICEHOUSE, TEARS FOR FEARS - which explains the excellence of the record.

Subtle twists and turns aplenty, Warren plays mind, and heart, games with the listener. He renders "Set Me Free" transparent and romantic...until it's turned inside out with the "one for the money, two for the show" line to trade a maudlin violin for a well-orchestrated carousel of elegant rock moves and the caress of slide guitar. Elsewhere, "That's How I'm Loving You" is cut from the same delicately fascinating fiber as "All The Love In The World" demonstrated, and this is, perhaps, the only thing which could be expected from James. He may claim he's an innocent bystander, but he's complicit in the crime of love. 4/5 stars

One track from "Jim's Easy Listening Album", the Beach-Boys tinged "You've Got The Love That Matters", reappears here and stands out amongst the Motown pastiches. Other highlights are the Beatlesque "Have You Seen The Colours", one of two songs co-written with Andy Davis in more harmonious times, and simply performed closer "I Just Want You To Tell Me". Hopefully Simon Cowell has been mailed a copy, since the songs themselves are individually worthy and could well chart in the right hands.

This album offers nine slick hummable songs, some of which remind us in many ways of music by The Pearlfishers. Our favourite cuts include "The First Time," "You've Got the Love That Matters," and "I Just Want You to Tell Me." The cover bears a curious resemblance to Sparks' Kimono My House album (!).

Warren's enduring passion for the infectious delights of pure melodic pop informed several excellent albums for The Korgis during the late seventies and early eighties ,along with a major singles success in the shape of the softly beguiling "Everybody's Got To Learn Sometimes." The former Stackridge stalwart's subsequent solo career has been a much more low-key affair but Warren's tuneful musical exploits always repay closer investigation nonetheless , and "Innocent Bystander" is thankfully no exception to the rule. "That's What You Do To Me" and "Have You Seen The Colours?" are the best of a catchy bunch.

As well as founding The Korgis he also co-founded Stackridge...now 65 years old, he has written and produced this album of unashamedly catchy tunes and sing-a-long choruses, decidedly retro in flavour...