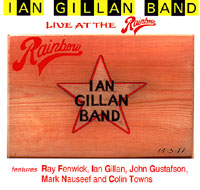 In April 1977, Ian Gillan Band had released the album “Clear Air Turbulence” which marked an altogether different direction for Ian Gillan melding as it did jazz, rock and funk influences. That album is well-documented on a companion Angel Air release, “The Rockfield Mixes”. Ironically, this change of tack has given the late-70s albums enhanced durability, contrasting with the expected heavy rock slant which can sometimes sound dated two decades later.

It was on 14 May 1977 in front of a packed house at the Rainbow Theatre in London that Ian Gillan Band performed one of their most memorable live gigs. Until now, that performance has remained in the vaults. Featured musicians: Ian Gillan, Colin Towns, keyboards, Ray Fenwick, guitar
John Gustafson, bass and Mark Nauseef, drums

Contained within the six tracks on the album are two 'Purple' classics, namely 'Child In Time' and 'Smoke On The Water' with the added joy of some shattering guitar from the vastly overlooked Ray Fenwick. Never previously released, this album is a slice of rock history. Serious rock fans overlook it if you dare.

"Live At The Rainbow" was recorded on 14th May 1977 in front of a packed house at the famous Rainbow Theatre in London...we are treated to storming renditions of Smoke On The Water and Woman From Tokyo. Twin Exhausted rounds off one hell of an album, a timely reminder that there was something between Deep Purple and Gillan that was definitely worth listening to.

This is an important album historically and musically as it captures Ian during his jazz phase, an era often sadly overlooked by many...This was a tight band, playing very intricate music, with some great bass/guitar interplay. The CD starts with two IGB numbers ("Clean Air Turbulence" and "Money Lender") and ends with another ("Twin Exhausted") but it is probably the three in the middle which will attract most attention.

The first of these is "Child In Time" which commences with some flute from keyboard player Colin Towns (the only member of the band to survive Gillan) and to say that the whole song has a different approach to the more well-known versions would be something of an understatement. As with all covers of "Smoke On The Water" IGB attempt to make theirs different from the rest, and with a totally different attack on the guitar during the chorus they do this well. The last of the three is "Woman From Tokyo" which is far more of a "straight" version.

An album for Deep Purple fans but also for those more into the jazz side of hard rock as well.

Those looking for a Purple/Gillan show will be very disappointed but those with an open mind will hear an artist who was not afraid to stretch out and experiment. Slightly flawed but still brilliant.