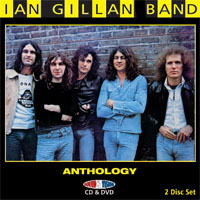 IAN GILLAN BAND was formed in 1976 and many of the audio tracks on this CD were recorded in Wales at the now famous Rockfield studios during late 76 and early 1977. This was followed up with a 19 date UK tour promoting the ‘Clear Air Turbulence’ album kicking off at Cardiff University on 29th April 1977 and finishing at Birmingham Odeon on 23rd May.

The tour included a show at The Rainbow Theatre, London where the DVD footage was recorded on 14th May 1977.

IGB touring was a wild affair but come show time the band were a tight professional outfit performing their own unique brand of rock music.

...it has held up remarkably well in terms of quality...Angel Air always comes up with some interesting releases and this is no exception...

Here, the air is much more clearer, with rock grit conscioulsy downplayed to give way to the brass to shine...the bonus DVD...makes this package...an alluring proposition and justifies the "Anthology" bill. ****

...slight tinges of Purple-style bombastic rock with surprisingly heavy doses of jazz and funk touches...will be enjoyed by the Purple vocalist's fans...

...this strange brew of fusion and hard rock...gives the album its charm and uniqueness; and anyone remotely interested in Gillan's music outside of Deep Purple should start with this album

The CD features some excellent tracks which show a change in direction from (his) Purple days. The music is more jazz rock and funky...

Bottom line is this anthology is a unique look back in time in the sense that the jazzy direction of The Ian Gillan Band was just a blip on the singer’s radar which only lasted a few years. By the close of the decade his new band Gillan found him firmly back on track and pursuing the hard rock/progressive direction of the group that made him a superstar.