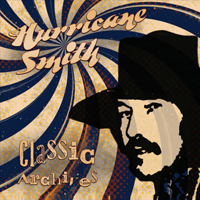 Norman ‘Hurricane’ Smith was the first recording engineer to work with The Beatles and was responsible for their entire Parlophone output from their 1962 audition for George Martin through to Rubber Soul in 1965.

His production and engineering credits include Pink Floyd, Stevie Wonder, Little Richard and Barclay James Harvest with far too many more to name. ‘Hurricane Smith’ made the transition from producer/ engineer to solo recording artist with the singles “Don’t Let It Die” and the phenomenal hit “Oh Babe, What Would You Say”, which reached number one in the U.S.A. charts.

The Inside Artwork includes:

A picture of Hurricane with The Beatles, with a letter from Paul McCartney and a telegram from John Lennon & Yoko Ono.

He talks with his son Nick about his life recording in the studio.

This is the first of our series “Classic Archives”