HUMBLE PIE On To Victory 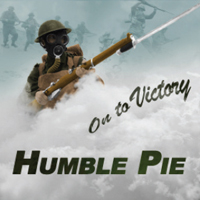 Humble Pie was an English rock band formed by Steve Marriott in Essex during 1969. They are known as one of the late 1960s’ first supergroups and found success on both sides of the Atlantic.

‘On to Victory’ is the ninth studio album recorded by the English rock band Humble Pie and the first with a new lineup including vocalist and guitarist Steve Marriott, Drummer Jerry Shirley, vocalist and guitarist Bobby Tench from The Jeff Beck Group, and American bassist Anthony “Sooty” Jones. Marriott also brought in backing vocalists Marge Raymond, Dana Kral and Robin Beck, once again looking for a more authentic and refined R&B sound and feel.