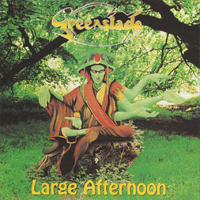 GREENSLADE the English Prog Rock band had a 25 year break before recording a new album back in 2000. Released to much critical and fan acclaim “Large Afternoon” is now re-released with informative sleeve notes by John Tucker having interviewed DAVE GREENSLADE.

“Large Afternoon” is an album that once again features two keyboard players, bass guitar, drums and vocals. The very features that make Greenslade stand out from any other band and made them one of the darlings of prog rock.

When it flies, it absolutely soars on 'Hallelujah Anyway', 'In The Night' and 'On Suite', all of which feature some sublime keyboard interplay and John's superb vocals...

To like this album one needs to appreciate the mellower side of prog, with a large dosage of pop rock as well. The music never gets too complicated and for me that is okay. Sometimes I just want to relax when I listen to music and Large Afternoon fits that bill rather nicely and the melodies are outstanding. Looking forward to checking out their '70s albums.

To finish off 'May Fair' is bright and breezy and bristles with much olde English charm that suggests maypoles and much frolicking on the village green! Enjoyed the whole CD.

The rest of the tracks, all instrumental, are dominated by a psychedelic chill-out vibe (as indicated by the sleeve), courtesy of two keyboardists (Greenslade and Young respectively). This gives the compositions an altogether bigger, more orchestral sound.

The playing is fluid and captivating and the songs are in the same general vein as they were in the early 1970s. Nine well-crafted cuts here including "Cakewalk," "No Room - But A View," "In The Night," and "May Fair."

The finished product lacked some of the inventiveness and originality of their early work but is well worth investigating nonetheless, with 'On Suite' and 'Cakewalk' emerging as the best of the bunch.