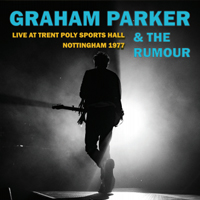 Graham Parker was born in Hackney, East London in 1950. In the summer of 1975, Parker joined ex-members of three British pub-rock bands to form Graham Parker and the Rumour. They began in the British pub rock scene, often augmented at times by a four-man horn section known as The Rumour Horns.

He appeared (along with the Rumour) on BBC television’s Top of the Pops in 1977, performing their version of The Trammps’ “Hold Back the Night” from The Pink Parker EP, a Top 30 UK hit in March 1977. This concert was recorded Live At Trent Poly Sports Hall – Nottingham – 25th March 1977.

Originally recorded for radio broadcast, but now available on CD.