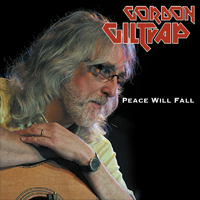 Over the past forty five years GORDON GILTRAP has graced the music business with his dedication to his craft and his affection for his audience. As one of the UK’s most respected guitarists he has consistently proved the adage that respect cannot be bought. It must be earned.

Although Gordon has collaborated on some of his albums over the years with other musicians this is the very first time it has been with a singer and a songwriter (CAROL LEE SAMPSON and MARTIN GREEN). “Peace Will Fall” is an album that blends exquisitely Gordon’s guitar and Carol’s voice.

As one reviewer said “Gordon’s guitar playing is difficult to categorise – it’s not folk, or rock or classical, but there are elements of all these in his music. His style is simply his own, and there is something very “English” about his music”.

On this reworked album he is accompanied by a wonderful singer Carol Lee SAMPSON, she's not very well known but has a very warm voice...A friend of Gordon, Martin GREEN is the author of the lyrics, also playing guitar. It's a lot about spirituality. This is all the more interesting as often Gordon GILTRAP's albums are rather instrumental. Acoustic guitars are commonly in the spotlight even if on "Praise Him" we are treated to the support of discrete keyboards...

Despite the theme, we are far from church music..."The Lord Is My Strength" is more folkloric, more cheerful and accompanied by a wonderful violin and some keyboards. "Echoes Of Heaven" is led by a narrative accompanied by an acoustic guitar...The stunning "Peace Will Fall" is sung beautifully by Carol and concludes the album. A soothing album, recommended.

It's the electricity-stricken "Echoes Of Heaven" - formerly known as "Sallie's Song" - and "Elegy" in the guise of "Walk Beside Me" that become the inspired pinnacle of Giltrap's method applied to "Peace Will Fall" to render delicate what was simply gentle before. Introverted, if never preaching, this is a triumphal attempt to speak to heaven.

...it is unlikely that a new listener would realise that these tunes had a previous life bereft of words. Sampson's voice is soothing and suits the mood well. She is possessed of a rich vibrato that she uses to very good effect...Giltrap's intricate fingerpicking is, as always, impeccable and provides a perfect foil for the mellow mood...for those of a spiritual bent it provides a fascinating new addition to his discography.

Never quite a rock, prog, or folk guitarist, Giltrap's pastoral style sits perfectly in this domain, his personal approach illustrated wonderfully on "First Light", as it compliments the passionate but restrained vocals from Sampson. In many ways it's the voice that makes the strongest impression here, Giltrap, a musician most often known an as instrumentalist, allowing the lady behind the mic more than enough room to shine, while never simply blending into the background. It's a trait revealed time and again, the busy guitar work on "Love Wins" never intruding into the vocal space, always leaving the over all impression as bright and breezy, while side stepping any notion of quaintness.

...if you hold beautiful acoustic guitar playing close to your heart, then there's little doubt that what Gordon Giltrap specialises in should appeal to you on every level. With wonderful vocals and heartfelt lyrics also feeling right at home in those same surrounds, this may not be an album you'll reach for often, but it's sure to delight when you do.

Last year's 'The Last of England' was a triumph and reinstated Giltrap's ascendancy in the world of acoustic guitar. 'Peace Will Fall' - originally released in 2012 as 'Echoes Of Heaven' - is sufficiently different with Giltrap's fretwork flourishes enhanced by Carol Lee Sampson's vocals. Her warm style is not dissimilar to Magenta's Tina Booth.

This is an interesting departure for Giltrap as mostly his albums are instrumental but punters should be aware that, as is often the case, older songs are re-worked and given a new twist.

So, for example, 'Praise Him' is actually 'Roots' whilst 'Under A Blue Sky' and 'The Lord's Seat' will also be familiar tunes found elsewhere. 'Sallie's Song' reappears as 'Echoes Of Heaven' with a narrated lyric, 'Elegy' becomes' Walk Beside Me'.

The overall spiritual nature of this album is reinforced by the presence of co-writer Rev Martin Green (yes, a real clergyman!) and the ambience...It seems that Giltrap is making up for a little lost time (and ill-health) reviving projects that germinated some years ago. With 'The Last Of England' he took up with a guy he'd first encountered at a car boot sale in the 1980s whilst this latest collaboration originated in a pub in Kenilworth in 2009.

For fans of Giltrap's work 'Peace Will Fall' is a handsome addition. And, no, we are spared a vocal version of 'Heartsong'. 4/5 stars

Although not overtly religious himself, Giltrap states that he believes that "all music that touches us is of a spiritual nature", and there are strong religious overtones on display here. While not as cloying as some of Neal Morse's messages, this may be enough to deter some. That said, this writer is someone who doesn't enjoy being preached to in music, but largely found much pleasant listening on offer here. This is largely due to Giltrap's ever wonderful guitar tone, a lush sound that weaves its magic from folk to prog across the material. Interestingly the religious aspect of the original cover has been dispensed with in favour of the more obvious Giltrap logo, but the spoken Biblical passages on the like of The Lord's Seat still grate. But not enough to distract from the overall enjoyment.

Over the past 45 years Gordon Giltrap has graced the music scene with his sublime guitar skills...this is the first time it has been with a singer and a songwriter (Carol Lee Sampson and Martin Green). "Peace Will Fall" blends beautifully Gordon's guitar playing and Carol's voice. Top tracks include "Christmas Carol", "Mary", "First Light", "The Lord Is My Strength", "Walk Beside Me", and the title track "Peace Will Fall".