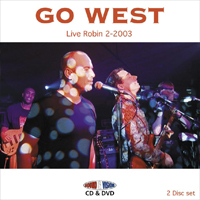 GO WEST were responsible for a string of worldwide chart hits during the ’80s and ’90s and had classic tracks featured in Hollywood films such as Pretty Woman and Rocky IV.

Playing live though was and is core to the band’s existence, and this CD/DVD release records the band playing a sold out concert at the Robin 2, Bilston, England during 2003.

DVD includes outtakes, interviews with PETER COX and RICHARD DRUMMIE, as well as a history of the band.

Still, while leading beyond the obvious hits such as "The King Of Wishful Thinking" which many remember from the "Pretty Woman" movie, this concert reveals a degree of homogeneity to the GO WEST oeuvre, even though the funky "SOS" and "Innocence" rock the house, and "I Want To Hear It" is quite an athletic exercise, Cox's grip on a microphone stand as firm as it is on the listeners in front of him. The band wring every sinew from their instruments and Drummie switches between keyboard and guitar to add texture to it all, yet, if not for a jazz piano "Missing Persons" could have test a non-initiated patience, unlike "The Sun And The Moon" that's evoking the spirit of Otis Redding, and "What You Won't Do For Love" that's part of a "guilty pleasure" ministry. And there's nothing wrong with it, as the cover of "Tracks Of My Tears" suggests: GO WEST still are the life of the party.

This lengthy concert features seventeen tracks and presents the duo and their backing band playing for over seventy-eight minutes. This double disc set contains the audio from the concert as well as a DVD for those wanting the complete experience. Tracks that will definitely take fans back include "Don't Look Down," "Goodbye Girl," "Innocence," and "The King of Wishful Thinking."

Playing live was and still is the core to this band's continuing existence and this release, on a combined CD and DVD package, captures the band playing live in a sold out show at the Robin 2 in Bilston during 2003. The set list that night included their hits 'Don't Look Down', 'Faithful', 'What You Won't Do For Love', 'Goodbye Girl', 'Call Me', 'We Close Are Eyes', 'Tracks Of My Tears' and 'The King Of Wishful Thinking'.

Live Robin 2-2003, a CD/DVD set, captures the band in a small, intimate setting during a reunion show. Unlike many bands of the era, it's obvious that Go West was a real band; Cox singing with a passion and a strength that wasn't enhanced by computer and studio trickery. This set is heavily Go West specific; eight of the nine songs are performed here, with single "Call Me" and album cut "Innocence" being highlights of the set. Though Dancing is largely ignored, their take of "True Colors" is excellent, and worthy of inclusion. "Faithful," the band's final major single, shows that by the end of their run, they had escaped the new wave pop ghetto they were regulated to, and were making fine soul music...

The DVD portion of this set (previously released in 2004 as King Of Wishful Thinking) offers the show in its entirety, and you can see how much fun the band is having onstage. There's also an excellent, career-spanning interview between the Cox and Drummie, and it's obvious of the love and the bond the two of them have as they regale with humour and honesty about the ups and downs of their career. It's an enlightening coda to an excellent reunion show, and makes this live disc a must-have for the Go West fan, as well as a nice introduction for the curious.