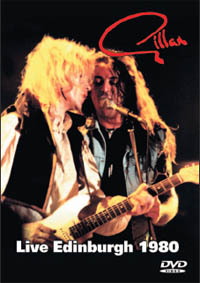 This is 1980 and it is the band GILLAN‘s year. The album “Glory Road” entered the UK charts at Number 3 and they had just returned from the USA from doing what they did best – playing live.

The concert footage on this DVD was performed for and filmed by Scottish TV (STV) to an audience whom Gillan had eating out of their hands by the end of their performance.

Classic Rock from Gillan – in their prime.

...a rare insight into what was going on with the band...Fans will be pleased with this.

This is a solid purchase for everyone that agrees with me that IAN GILLAN has had his heyday!

...really amazing...captures Gillan in the glory of their breakthrough year...

If you are a Gillan fan, "Live Edinburgh 1980" is one show you wont want to miss. This guy is one h... of a performer. The songs are great, the musicians excellent and really are "into it". The people that have transfered this TV show to DVD did a great job. Visually and sound wise... the result is more than excellent.

Nine great tracks and some very interesting bonus material. For Gillan and Deep Purple fans, this is one DVD you can't go without. Highly recommended indeed.

...if you enjoyed the heavy hard rock of Gillan and songs such as Trouble, No Easy Way and M.A.D. then relive the raw metallic sound they generated on this enjoyable release.

Featuring a blistering five song set recorded for television in 1980, as well as some archival footage with an earlier incarnation of the band, and interviews with the band (minus Ian himself) the DVD is well stocked for the Gillan fan...

This DVD is really amazing - and not just because it captures Gillan in the glory of their breakthrough year...

...there is also recent footage of GMT (Robin Guy, Bernie and John) performing 'Cannonball', interviews with John, Bernie, Colin and Mick as well as a history. At over two hours long this is essential.

The DVD is loaded with extras to help to make up for the short main feature...The quality of the main feature was pretty decent considering the age, and the source, of the material...This DVD provides a short, but worthwhile look at the prime solo years of this legendary rock vocalist and his excellent band.

As an archive release this DVD is one of the most worthwhile so far this year. Not only does it perfectly capture the moment it also gives us a reminder of another side to Ian Gillan away from Deep Purple.

Right then, following on from the album, you get a pretty good DVD. Sure, the "concert" footage was filmed for STV in 180, and you get a measly five songs, but it's the bonus features that really stand out on this DVD, especially the documentary that traces the history of Gillan (the band that is), through interviews with John McCoy, Bernie TORMÉ, Colin Towns etc., that actually becomes the centre piece of the DVD for me, filling in a lot of blanks, and rounding out the Gillan story nicely. Add some bonus tracks, and you’ve got a nifty little slice of history that for once focuses on one of British metal’s often unsung and often forgotten, best bands. About bloody time I reckon…

Tim Cundle, Mass Movement 'Zine, Subba Cultcha (May 2006) BERNIE TORMÉ Stratocaster Gypsy DVD (NJPDVD625) It's got an hour of clips and live fare - along with a recent hour-long interview and photos

Stratocaster Gypsy is a collection of video clips and live performances taken over the years that features TORMÉ's blistering and raw style, fuelled my manic whammy bar dive-bombs on his worn Fender Stratocaster guitar...The performances though are excellent-check out the live clips "Star", "Frontline", the rampaging "Turn Out the Lights", "Vampire" , and "Hardcore", all obviously taken from the same gig and featuring a hot band who were really on that night, especially Bernie.

...this is pretty rare and wild stuff here that will no doubt need to be in the collection of every Bernie TORMÉ fan out there. Those who have never heard the guitarist before might want to seek out one of his live CD's first to get a introduction to his music.

...well worth the time investment. The music sounded great...The band...amazing

For fans of hard rock, of the type that Deep Purple and Dio would play in the seventies and Whitesnake would play in the eighties, "Live Edinburgh 1980" is a DVD to pick up. The extras may be a little weak, but the main performance is amazing, and even more so considering the age of the tape.

...perhaps the best part of this DVD, for fans, is the lengthy interview with the band members (without Ian Gillan). There was always a begrudging undercurrent post-1982 and this section helps throw some light on the problem.

A classic Gillan performance...this set is just filled with extras.

...the musicianship is top notch...Bonus material includes a one hour documentary with interviews

...some rare and impressive stuff from a line-up that hardly gets talked about...