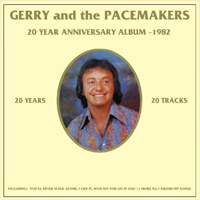 Being known as the second most famous group from Liverpool, England is not such a bad thing considering who the first one is. Gerry & The Pacemakers achieved no less than three UK Number 1′s, two Top 5 and one Top 10 singles since the bands formation in 1962.

GERRY MARSDEN created a national anthem with his endorsement of “You’ll Never Walk Alone” which has become the signature tune of Liverpool football club and to this day is sung at the grounds throughout the UK.

In 1981 Gerry met up with DAVID MARTIN (singer/songwriter and producer) when they were holidaying in Spain and having struck up a lasting friendship they decided with 1982 looming it would be a great idea to make a 20th Anniversary album.

...other notable covers include "The House Of The Rising Sun" which The Animals wrote ..."World Without Love", oh such beautiful songs, we cannot forget, came about through a co-authorship of Lennon / McCartney written for the duo Peter & Gordon, and thus scored a big hit.

...Some songs are great, others less interesting to listen to. But the Majority of songs packed on this compilation are acceptable overall.

...Tuneful gems such as 'You'll Never Walk Alone', 'How Do You Do It' and 'Ferry 'Cross The Mersey' are all given an airing, alongside Gerry's covers of a string of UK chart-toppers which presumably formed part of his later cabaret act. These include 'House Of The Rising Sun' and Peter Sarstedt's 'Where Do You Go To My Lovely'.

...the real magic is conjured on the haut-couture PACEMAKERS ballad "Don't Let The Sun Catch You Crying" which wins, hands down, over the omnipresent "Unchained Melody"...

Produced by hit singer-songwriter and producer David Martin, it's an absorbing hour with some fully committed performances, both vocally and instrumentally - Gerry's intrepid phrasing and the very interesting musical arrangements lavished right across the material, whether in distinctly evocative mood or up-tempo and bouncy.