GARY HUSBAND The Complete Diary of a Plastic Box 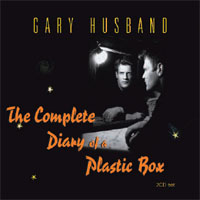 ‘Diary Of a Plastic Box’ was GARY HUSBAND’s very first solo album released in 1999 by a small independent label but was soon deleted due to label issues. However due to a overwhelming number of requests to Gary from all over the world he was inspired to revisit the original album and now the album is remastered and extended to a 2CD set.

Multi-instrumentalist/composer Gary Husband has an ever expanding list of credits to his name, working over the years with numerous major artists from both the rock and jazz worlds. What he didn’t have (for quite a time) was an album of his own, but that changed in 1999 with the release of his debut solo set, Diary of a Plastic Box. Issued by a small indie label, the album was soon deleted (at Husband’s request), but Angel Air has now reissued it with a bonus CD of new material. Diary was intended as precisely that, a record of specific times, places, people, and things, an aural log that kept Husband grounded while touring with a variety of bands between 1989 and 1993.

The resultant album is a highly personal pastiche of short instrumental pieces, each distinctive and a world unto itself. A number of the musical themes presented within are revisited on the second disc, which is “a continuation of the journey,” as Husband explains in the sleeve notes. Taken together, the set is highly evocative, an exploration of mood-inducing music that feels cohesive, even though it’s quite diverse. Chuffing trains steam through Toytown, England’s rich green pastures are recalled, mice scamper gaily across keyboards, exhilarating jazz legends are revisited (as are the pomp-rock glories of yesteryear), and Christmas comes to a mall near you. Creating mostly in an avant-garde jazz mode, Husband folds into the arrangements a plethora of other styles, from jazz fusion to ambient chill. A number of pieces are guitar-driven, while rhythms in unusual time signatures play an important role in others. All told, Diary is an intriguing set, one that jazz fans in particular will find fascinating.

Drumming legend Gary Husband did such a great job on the 2008 album by Jack Bruce and Robin Trower, Seven Moons, that it’s a bit strange to discover a 2008 double CD set from Husband that features him stretching out on some incredibly avant gard musical terrain.

Recorded on a Korg M1 synthesizer / workstation between 1989 and 1993 and initially released in 1999—with further recording, audio optimization, track/samples editing and entire remastering done in 2008—the 40 tracks that make up Husband’s The Complete Diary Of A Plastic Box sounds like what would happen if avant gard pioneer Edgard Varese decided to make an album of poly-rhythmic improvisational jazz fusion vignettes. A first rate jazz-rock drummer, Husband is on the same wavelength as the great Bill Bruford and—considering that this music sounds highly personalized and very electronic in nature—some of the pieces are similar in scope as Bruford’s ‘77 breakthrough debut Feels Good To Me. Commenting in the liner notes on the original recording, Husband adds, ‘Despite the fact that I was on the road, usually in my capacity as a drummer, working for other various artists, I’d constantly seek out opportunities to fade into the background and work on my own private musical endeavors, which, throughout these lengthy stretches, was an enormously fruitful and rewarding form of “therapy” for me.’

Throughout the 40 tracks on this 2008 double CD set on Angel Air, Husband’s unique electronic instrumental e-jazz makes for a wildly adventurous, yet completely captivating ‘soundtrack’ experience.

Unlike most expanded albums, what's most remarkable about The Complete Diary of a Plastic Box is that it actually feels more complete as a double-disc set, with nearly two hours of multi-tracked explorations into the possibilities of one man, one Korg M1 Workstation and one set of headphones. Largely a set of miniatures with only three tracks exceeding five minutes, it's effectively a travelogue of life on the road, a chance to hear Husband, who was largely touring as a drummer at the time, emerge as a talented keyboardist and writer. The album's all-electronic complexion may put off the purists, but this is still a "playing" album— every layered track was performed in real time, with no quantization and the only editing an aid to connect each disc's twenty songs.

In 1999, Diary was a calling card for Husband the keyboardist and composer. But the rhythmic aspects and knotty themes that pop up throughout are inventions that could only come from someone for whom rhythm is an equally important piece of the overall puzzle. Rather than thinking of Husband's careers as drummer and keyboardist as two separate entities, it would be better to think of them as a single, integrated musical interest. With a strong sense of melody, groove and texture, The Complete Diary of a Plastic Box is a welcome return of an album that should have received more attention at the time and, in this new and improved expanded edition, deserves to draw attention to Husband as a complete musician, neither just a drummer or a keyboardist.

…the set is highly evocative, an exploration of mood-inducing music that feels cohesive, even though it's quite diverse…one which jazz fans in particular will find fascinating.

With a strong sense of melody, groove and texture…a welcome return of an album that should have received more attention at the time…