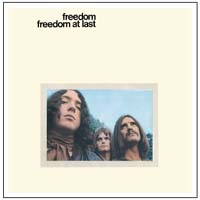 FREEDOM was formed in the autumn of 1967 by two ex members of PROCOL HARUM, drummer BOBBY HARRISON and guitarist RAY ROYER. Following the release of “Black On White” Harrison sacked the other group members and invited super cult guitarist ROGER SAUNDERS and bass player WALTER MONAGHAN to join him playing heavy blues rock.

During 1969 they released “Freedom At Last” followed in 1971 by “Through The Years” They got to tour the USA supporting BLACK SABBATH and JETHRO TULL where both albums got released.

Whilst they could sell out live shows and had toured extensively throughout their career the goal of a hit album eluded them and in 1972 they threw in the towel.

Bobby Harrison went on to form SNAFU with MICKY MOODY, Roger Saunders joined MEDICINE HEAD then spent most of the 80’s as a member of GARY GLITTER’S band. Freedom never quite made it to the first division of British rock. Not because of lack of ability, just sheer lack of luck. What we are left with is perhaps more a case of “what might have been” than what actually was, at least in a commercial sense.

Then again-who cares when the music’s playing!

This is music from the late Sixties that is influenced by bands such as Cream...For me this is one of the most-played releases that I have had from Angel Air, as it is such an easy album to get into, yet there are so many layers that each time I play it I get even more from it. Plenty of information in the booklet makes this a wonderful release.

...strong blues-rock with influences of Groundhogs and Savoy Brown with some Captain Beefheart-esque vocals...an enjoyable set...informative sleevenotes do help the overall package though

...a quality album...An amazing power trio this is probably the missin g link between 60s bands like Cream and the Jimi Hendrix Experience, and more experimental outfits like Led Zep, Deep Purple and the harder edge that The Who developed. A great gem of an album, released with the impeccable presentation that sets every Angel Air release apart from the crowd.

...12 songs, mixing blues chestnuts such as 'Hoodoo Man' and 'Down In The Bottom' with hard-riffing originals...