FATIMA & THE MAMLUKS The Hammer & The Heart 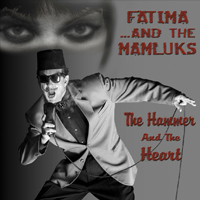 Following a hugely successful decade as leader and singer/songwriter with SAILOR, who had a string of hits in the ’70s, and then further recognition as electronic act DATA – GEORG KAJANUS’ plans in the early ’80s for FATIMA & THE MAMLUKS were the latest in a successful career as composer, writer and artist.

FATIMA & THE MAMLUKS were aimed at the dance floors as much as the charts when Georg teamed up in 1983 with his Sailor colleague HENRY MARSH to write and record the tracks. Once completed the tracks were passed to remix duo Art Maharg and Joseph Watt to remix as part of their Razormaid Productions.

The track “Hassan” has recently been featured in internet retailer ASOS’s advertising campaign. This track was a USA club hit in the ’80s.

Following a successful decade as leader and singer-songwriter with Sailor, who had hits in the 70s with 'Girls Girls Girls', 'One Drink Too Many' and the splendid 'A Glass Of Champagne' and then further recognition as electronic act DATA, Georg Kajanus created Fatima And The Mamluks (what is a 'mamluk'?), in the early eighties. They were aimed at the bulging dance floors of that period as much as the charts when, in 1983 Georg teamed up with former Sailor colleague Henry Marsh to write and record these tracks - it's now released on this budget priced CD (or digital download).

The album was not released in the '80s. This edition by Angel Air, a label that is mainly engaged in the field of rock and pop bands of the '70s and '80s, is thus its first release.

The five original masters bring together just 17 minutes. Four remixes of three titles, including an almost completely instrumental version of "Hassan", then bring the album to more than twice the playing time. The mixes were created by the remix duo Razormaid Productions - Art Mahrag and Joseph Watt - for the American DJ market, where "Hassan" was quite successful in the 1980s.

For fans of beat-heavy disco and pop music The Hammer is well worth an ear...

Only 5 songs and 4 dance remixes, but much sought after by club fans. A wonderful mix of arabic sounds with new wave beats. Dance the night away!

This newly assembled Angel Air anthology focuses attention on the short-lived project masterminded by George Kajanus of Sailor fame in 1983. The bizarre, dance oriented results were certainly a far cry from his former outfit's chart successes such as "Traffic Jam" or "A Glass Of Champagne," but diehard Kajanus completists should welcome this opportunity to add some of the great man's most obscure creative outpourings to their collections.

Not a pastiche by any means, opener "Hassan" strives to create a new context for Levant tunes wrapping the chanteuse's invocations in delicately textured techno whose beats are dipped in synthesizers' waves, while the voice of Kajanus is driving "The Hammer & The Heart" through dervish-like swirls, raps and riffs towards memorable delirium. The "Ghostbusters" theme never far away from these humorous tracks, Fatima's insistent cries "Yalla!" and demented trills over cavernous undercurrent lodge "Toubib" into the listener's lobes, whereas "The Heart" would relocate a strings-drenched drift from the banks of the Nile to the southern side of the Seine to pour a glass of champagne over its balladry. But "Behne (I Won't Follow)" is a hard-hitting slice of heavy funk which hasn't dated a tad in the last three decades to remain ripe for rediscovery and be able to ride the charts of today.