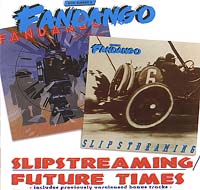 This intriguing Angel Air release spotlights two albums produced in the wake of punk rock and seemingly destined to be overlooked in the history of heavy rock.

Their first album, “Slipstreaming” was recorded and originally released on a small German label in 1979. The second album, “Future Times”, was recorded and released the following year with Mac Poole, former Warhorse drummer, replacing Penny.

Now available for the first time on CD, this release includes two singles and bonus tracks never before available on CD. As ever, this package is completed by comprehensive liner notes and band photographs. The album is a must for any fan of British Rock and a real gem for any collector of Deep Purple related items.

... Musically the two albums...provide pretty much what you would expect from a 70's British heavy rock outfit, with a certain leaning towards the more groove laden styles...

... even a cursory listen to Fandango's output places them so far to the forefront of what was gradually coalescing into the New Wave of British Heavy Metal that the group's total obscurity must really hurt. Hopefully, this (as usual) lovingly and lavishly repackaging will at least grant Fandango some historical kudos.

To all Deep Purple fans...this is an invaluable release as it provides an inexpensive way to help pad out the collection as this contains both albums and unreleased recordings...

Now you can re-live the band's solid no-frills sound on this double CD - featuring more than an hour's worth of music along with bonus tracks. Seven out of ten.

I've owned the original LPs since their initial release and over the years I've come to enjoy these records more and more. A great package and a recommended purchase

Though Fandango goes more into a mellower direction of the hard rock scene, I still recommend this double CD to fans and collectors of the 70's heavy rock sound...Not as heavy as Warhorse..but still very enjoyable

In the late 1970s former DEEP PURPLE bassist Nick Simper formed his own band, playing Classic Hardrock a la DEEP PURPLE, LED ZEPPELIN and some URIAH HEEP, yet a bit softer and bluesier at times. The band was called FANDANGO, not to be confused with the same named American band of JOE LYNN TURNER in that same period. Anyway, the British FANDANDO managed to release 2 albums in the late 1970s, both are now available on a double-CD, released by ANGEL AIR RECORDS. With the addition of 4 unreleased bonustracks, the 20 songs in total on this double-CD are a must for every fan of Classic 70s Hardrock/Heavy Rock.

Highlights include such 70s Rockers like “Independent man”, “Slipstreaming”, “Pull out and start again”, “Hard drink and easy women” and “Candice Larene”. The Bonustracks are slightly seeing the band moving more into an AOR/Mainstream Rockstyle (RUSS BALLARD tracks “Just another day” and “Is my love in vain” – polished early 80s AOR), sounding a lot like the US band FANDANGO!!! Nevertheless, this CD is a must for fans of DEEP PURPLE, but also if you like BAD COMPANY, LED ZEPPELIN... (8/10)