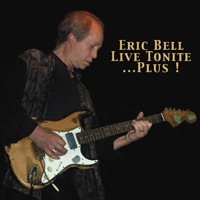 ERIC BELL first came to UK notoriety when he joined THEM just before VAN MORRISON left for the USA to establish a solo career circa 1966. However he really hit the big time as a member of THIN LIZZY and co arranged/wrote both “Whiskey In the Jar” and “The Rocker” during the early 70′s.

By the mid 70′s Eric had left Thin Lizzy (citing health problems) and would play with NOEL REDDING, MAINSQUEEZE and his own Eric Bell Band over the next twenty-five years.

Eric is celebrated today as a second to none blues guitarist. The guitar playing on these tracks recorded live is immaculate, smooth and masterful. There is more than a hint of traditional Irish fiddle technique in his approach. More surprisingly Bell also turns out to be a fine lead vocalist

This CD was recorded live in Sweden during 1996 and if you enjoy dry close up sound of very intimate recordings of a guitar great …then this one is for you!

A classic blues album...Bell is undoubtedly an outstanding guitarist, whose smooth playing gives a lilt to his music that hints at traditional Irish music without being it....Recommended to Thin Lizzy completists and lovers of good blues

Most of the songs of Eric's live set are rhythm and blues standards which showcase Eric's excellent guitar work....the best track of the lot is possibly the final track, a stunning version of Van Morrison's "Gloria" which was a hit for Them, while Eric was a member...real class blues rock....If you like your blues played with style and emotion, I would advise you to seek this album out and give it a listen. You won't be disappointed

Fabulous playing and surprisingly strong singing make this a pleasurable experience...The sleeve note proudly places Bell in the front rank of Irish guitarists...only a fool would argue with that assertion

...celebrated as a top blues guitarist, this live performance was captured on his '96 tour

...The feeling is one of smoky bar intimacy, with Bell and his backing duo running through a number of standards to warm reception...Buddy Guy's "Hold That Plane" is supremely rendered and a couple of 'Lizzy knocks include nearly 10 minutes of fuzz-laden "Whiskey In the Jar"...Solid.

...A fully functioning blues-rock set recorded live in Sweden during the mid-1990s...The sound quality is delightful - his guitar, fully to the fore, has lost none of the clarity and distinction that graced those first Lizzy albums...Add a well-annotated/illustrated eight-page color booklet and the entire package is a delight.

…Eric remains a bluesy guitarist par excellence, and this fine live set boasts covers of everything from Muddy Waters 'Baby Please Don't Go' to Van Morrison's 'Madame George', as well as Lizzy's 'The Rocker' and 'Whiskey In The Jar.'

...an excellent live album by the pioneer of the Thin Lizzy guitar sound.

...an excellent reissue that puts you front and center at one of Eric's concerts in Sweden circa 1996...this set proves that he's one of the most articulate and soulful guitar players on the planet...

...an understated but not unattractive set of lean blues-rock...