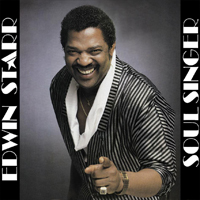 EDWIN STARR found success signed initially to the legendary Tamla Mowtown label with worldwide hit singles “Stop On Sight (SOS)”, “War” and “Contact” and by the late ’70s Edwin was the hottest “disco” property of that time.

In the early ’80s he did some “label hopping” before getting a deal in 1984 with the newly launched Hippodrome Records (formed by club owner Peter Stringfellow and singer songwriter David Martin to coincide with Peter’s opening of the world famous Hippodrome Club in London, previously called The Talk Of The Town). Released for the first time ever on CD is the entire recorded output of Edwin from the period 1985 to 1986 on Hippodrome Records including the much sought after single “It Ain’t Fair”.

Sadly on 2nd April 2003 Edwin died suddenly but the voice, charisma and legend of the man lives on through his music.

By 1983, when Edwin Starr relocated to Albion, his hits had dried up, yet there still was too much honey in the veteran's voice to stop - and he tried, again and again. The American's association with Hippodrome Records didn't even result in a longplay, but it brought about a handful of '45s that are collected on a single disc...

...it would be impossible to stop Starr's sweet roar on "I Need Your Love" and the collection's title track which sees him namecheck fallen heroes: Otis Redding, Marvin Gaye, and Jackie Wilson.

This CD contains all of the tracks that Edwin recorded for Hippodrome Records. Sadly Edwin died on April 2, 2003. I worked with Edwin a couple of times and he was a very nice guy...

The complete output of the late Edwin Starr on Hippodrome Records is on this album. More disco oriented material from 1985-1986.

'Soul Singer' collects his mid-80s singles for the label and while he suffered the trappings of the decade, 1985's 'It Ain't Fair' and 1986's title track are notable: the first driven by Starr's remarkably intact tough vocal; the second, a touching tribute to soul itself: "In the year 1965 soul music was very much alive, Otis Redding, Jackie Wilson, Marvin Gaye," he sings.

These hitherto unreleased on CD tracks represent Edwin's entire output for Peter Stringfellow's Hippodrome label during 1985 and 1986, including the distinctly disco oriented revamps of Marvin Gaye's "I Heard It Through The Grapevine" and Wilson Pickett's "Land of 1000 Dances."