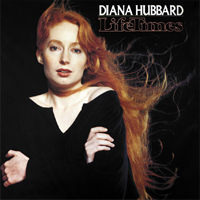 DIANA HUBBARD was born in London, the first child of L. Ron Hubbard (the founder of the Scientology) and composed sonatas for piano at age 6, then she attended the Royal Academy. Diana released her one and only album back in 1979 which is now released on CD for the first time. At the time Diana explained her motivation and inspiration for the album “I wanted to compose music that is ‘felt but not heard’, and revitalize the romantic aspects to jazz”.

BILLBOARD magazine gave the album a “Top Album Pick” at the time of release and described the album as a “light classic pop LP” and that the music is “mostly soft and pretty, drawing from many ethnic sources”.

Diana HUBBARD comments: "My music is for when people want to turn off the lights, listen and escape to another world. To dream of magical places in which the listener can participate and feel involved." The style of Diana HUBBARD is romantic, seducing the listener with an elegant style, refined, while delicate. We enjoy the inclusion of a string trio on 'Russian Roulette' and 'Medieval Heart', with the contribution of Dennis KARMAZYN on cello, Carole SHIVE, violin and David CAMPBELL viola. Throughout the album, we can hear Jim COWGER on wind instruments, Al HENDRICKSON on bouzouki, Denny SEIWELL (ex WINGS) on drums, and Johnny PIERCE on bass...An elusive disc that seduces lovers of subtle emotions and refined music in the classic style.

Another lost gem recovered from the vaults and reissued for the very first time on CD by the fine folks at Great Britain's Angel Air label. The Angel Air folks never cease to amaze us with all the truly neat things they discover and reissue for an entire legion of new music fans to discover. Born in London, Diana Hubbard is the first child of L. Ron Hubbard...and LifeTimes is/was her one and only album release. Hearing this, many may wonder how on earth it is that this talented individual did not opt to pursue a career in music. Diana's piano playing is emotionally gripping and real.

Folks lending their support include Chick Corea, Stanley Clarke, Patrick Moraz, Denny Seiwell, John Goodsall, and Ric Panrell (!). Even though Billboard magazine gave LifeTimes a "top album pick" at the time of its release, for one reason or another the album did not hit the commercial target the way it should have. And the music eventually faded away into obscurity...until now. These tracks have held up exceptionally well over time, particularly when you consider the fact that the album was originally released in 1979. While hearing these tracks, you'd never in a million years know that these are recordings from the late 1970s. They have a big slick crisp sound that can easily compete with most modern recordings. Highly stylized melodic tracks include "Rose Colored Lights," "Dream #23," "Berlin 1945," and "Midnight #3." Smart, resilient, impeccable...and rather magical.

Drawing on Rachmaninoff and other Romantic influences, the cinematic simplicity of elegiac ballads such as "Rose Colored Lights" is expressive and arresting, with Danny Seiwell's sensual drumming measuring quiet pleasures as outlined by opulent strings and brushed with otherworldly synthesizer. Chick Corea may weave his cosmic magic on "Bewitched" and Patrick Moraz shimmer on "Morning" where emotional promise becomes palpable, although it's a two-movement epic "Russian Roulette" that unfolds the whole progressive intent of Hubbard's orchestrally enhanced, if somewhat quirky, enterprise.

More traditional, with Ravel's spirit in its slow roll, "Arabia" must attract any art-rock aficionado, but the splashes of "Berlin 1945" are as cold as they're triumphant, and there's Stanley Clarke's gentle bass to soften the depth of "Dream #23" which will expand further in "Dream #5" after "Rainy Streets" has grown in scope from sparse drops to the woodwind gusts that support Diana's dynamic chords. Deceptively chamber-like, the cello-charmed "Desperation" will turn out to be the most playful number, and the Bach-evoking "Medieval Heart" most abstract, while "Midnight #3" - based ostensibly on "Moonlight Sonata" - should give the album a nocturnal finale. So unstructured or not, "LifeTimes" can't be called appalling; this record is rather enchanting, and it's a pity Ms Hubbard didn't get around to another one. ****

Musically she was discovered in 1976, and recorded this album in 1979. She herself said she wanted to make music that was felt, rather than heard, with romantic aspects of jazz. Diana wrote all the music herself, and received help from musicians such as Chick Corea, Stanley Clarke, John Goodsall, Michael Boddicker and Patrick Moraz. The music sounds like light classical with pop influences. Diana wrote an explanation for each song, and opener 'Rose Colored Lights' revolves around the yacht on the Mediterranean. The song was released on single the following year. The other tracks are in the same style. This album is now a rarity, and now appears on CD for the first time.

A much sought after album, the only album ever recorded by the daughter of L. Ron Hubbard, in a slightly classical poppy way.

Diana Hubbard was born in London, the first born child of L. Ron Hubbard, the founder of scientology. She was composing piano sonatas by the age of 6 and went on to attend the Royal Academy of Music in London. She released this, her only album, in 1979 and it is now available on CD for the first time...the impressive list of Jazz musicians involved includes Chick Corea, Stanley Clarke, Patrick Moraz, Denny Seiwell, John Goodsall and Rick Parnell.