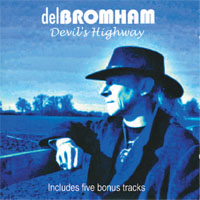 DEL BROMHAM is singer/guitarist with legendary British Rock band STRAY and ‘Devils Highway’ is following in the footsteps he created of his strong blues style of guitar playing that permeates throughout STRAY.

Some 5 songs have been added as bonus tracks which were recorded in 2011. Del is planning a solo tour of the UK to promote the re release of the album.

While Stray's sound leans more towards straight-ahead, classic/ hard rock, Devil's Highway allowed him the chance to finally indulge in his love of traditional blues. The result was this stripped down, eleven track, acoustic / electric affair , that took him outside of the familiar sound of his 'other' band.

From the opening acoustic, swamp slide of the title track, it won't take the listener long to realize that Del is indeed the real deal...

Well into his sixth decade in music, Del Bromham is still going strong and thankfully shows no signs of slowing down anytime soon. If you want a real taste of what an authentic blues record should sound like in the 00's, then look no further than Devil's Highway. This was a superb release back in 2004, but now with the added bonus tracks, you can consider this reissue to be the definitive version.

An album that takes a time-honoured approach to music, rock fans will lap this one up

..splendid solo set...indulging his lifelong love of the blues...

Good though 'Devil's Highway' is this set of bonus songs actually makes this version into a far better album than it originally was.