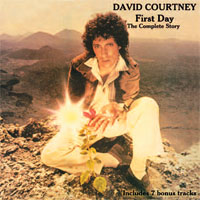 DAVID COURTNEY is an internationally acclaimed songwriter and record producer and over the past 35 years has achieved, Platinum, Gold and Silver discs representing the millions of records sold worldwide.

He has had ASCAP awards as well as a Grammy nomination. His initial commercial success came about in the early 70’s when he discovered LEO SAYER and they wrote together ROGER DALTREY’s classic album ‘Daltrey’ which included unforgettable tracks as ‘One Man Band’ and ‘Giving It All Away’. He then co-wrote with Leo the song ‘The Show Must Go On’ and the rest is history (he also wrote Dollar’s ‘Shooting Star).

David as a natural singer songwriter then took the leap to record his first solo album ‘First Day’ which was released in 1975 which he achieved some modest USA Chart success with.

Remastered and released on CD for the first time this groundbreaking eclectic album is a must for all fans of intelligent, crafted music. David commences a UK tour in January 2010 with ‘Thunderbirds’ co-creator Sylvia Anderson – look out for it at a theatre near you.

Some of these works are grandiose...and if you can recall some of Leo Sayer's early singles you will understand...Some of the bonus tracks provided are, for me, more interesting than those on the original album; in particular 'Rag And Bone' and the instrumental, sweeping, majestic orchestral composition 'Broken Leaves', which comes close to justifying the CD by itself!

...while the album failed to make much of an impact on either side of the Atlantic it remains a testament to his supreme talents as both a musician and a songwriter...Some of the guest artists who appear here represent the cream of the crop of British classic rock...not to mention Pink Floyd's David Gilmour...

First Day is a top notch effort from top to bottom...

There is some superb playing by session players who are well known and established in their own right...