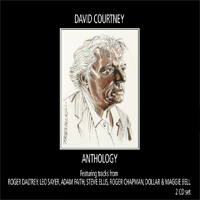 David’s career has taken him on an incredible journey which reads like a film script. He drummed for ADAM FAITH in The URCHINS and then discovered LEO SAYER, co-writing and co-producing many of his greatest hits including “The Show Must Go On”, “One Man Band” and “Long Tall Glasses”, He has also written and produced hit records and albums for ROGER DALTREY, DOLLAR, JOE EGAN and ODYSSEY to name just a few. He has in excess of 30 million global record sales to his name and “Anthology” features track after track written or produced by him.

“The Daltrey album co-written and produced by David Courtney is one of my favourites and one of the great, probably underappreciated albums ever” SIR ALAN PARKER CBE

“Everybody thinks that Adam Faith discovered me, but it was David Courtney” LEO SAYER

ROGER DALTREY on Squeeze Box continues in the tradition of classic singers...We do not forget ROGER CHAPMAN and his guttural voice on 'Midnight Child', or the fabulous MAGGIE BELL with 'In My Life'...we can also hear folk with Marina Kapura or the exquisite JOE EGAN of Stealers Wheel...there is even a dose of hard rock with Steve Ellis accompanied by Brian Robertson of THIN LIZZY and MOTORHEAD...

A trip down memory lane, if your memory stretches back that far, or an introduction to one of our most successful songwriters.

Anthology gathers together 37 tracks Courtney either wrote or produced and while it is, obviously, a limited taster of his impressive catalogue, there's no denying that each and every song keeps you engaged and entertained...a selection of crafted rock numbers with a pop eye embellished with superb arrangements and the odd touch of strings and brass. The cast list is stellar and there isn't a single performance dialled in, combine that and the aforementioned skilled songwriting and production and there could only be one outcome. Anthology is a fitting reminder of the talents of the one and only David Courtney.

Still, it's all about the song, not the singers or players. And the song is about the mood, be it the majestic blues of 'In My Life' which Maggie Bell settles on, the delicate ennui of Marina Kapuro's take on 'The Easy Way Out,' or joie de vivre of 'The Dancer' that SMOKIE fill with velvet harmonies. While Courtney wrapped Steve Ellis' voice in strings on 'Rag And Bone,' he chopped the upbeat 'Blackmail' with Brian Robertson's axe for the same vocal cords to get high...David Courtney knows no limitations style-wise, because ultimately it's the tune that reigns here. A unique talent.

Angel Air Records recently released this monster double-disc set. What we get is a generous treasury of golden hits, performed by the best in the biz! Which is precisely as it should be to 'celebrate' the man responsible for over 30 million global record sales. The 37 tracks are monopolised by the ever excellent Roger Daltrey (11 tracks), Leo Sayer (10 tracks) and Adam Faith (5 tracks). In between, we are treated to contributions from Steve Ellis, Maggie Bell, Dollar, Odyssey, Joe Egan, Smokie, Roger Chapman, Russian singer Marina Kapuro, and some other special guests...

The list of artists includes Leo Sayer, Adam Faith, Roger Daltry, Roger Chapman, Maggie Bell, Smokie, Steve Ellis, Dollar, Odyssey, Marina Kapura, Joe Egan, and Geisha. Talk about a varied and impressive list of connections (!). This hefty double disc collection features thirty-seven tracks and, as previously mentioned, you'll be surprised at how many of these songs you know. Courtney has in excess of 30 million global record sales to his name. Whew. If you're looking for the single best source to find David's biggest hits all in one convenient package, this is it.

David Courtney has had a highly successful career as a songwriter and producer...highlights include Giving It All Away by Roger Daltrey, Midnight Child by Roger Chapman, In My Life by Maggie Bell, The Dancer by Smokie, Rag and Bone by Steve Ellis, Shooting Star by Dollar, The Easy Way Out by Marina Kapuro, Magic Touch by Odyssey, Back On The Road by Joe Egan and Squeeze Box by Roger Daltrey and Adam Faith.

...Meanwhile one less-known Adam Faith song features backing vocals (!) by Paul and Linda McCartney. Elsewhere, Mr. Faith's in great form on the now ironically titled 'I Survived' from 1974 - which has a startling contribution from guitar great Ritchie Blackmore. Talking of illustrious guitarists, Eric Clapton can be heard on one of Daltrey's cuts, Steve Cropper's on one of Leo Sayer's, Thin Lizzy's Brian Robertson appears on Steve Ellis's - and David Gilmour is encountered on a recording by Courtney himself.

I didn't skip a single track. The list of featured musicians is awesome, McCartney, David Gilmour, Steve Cropper, Ritchie Blackmore, Eric Clapton, Rod Argent, Ray Parker Jnr and on and on. To sum up this overview of one mans work is class, pure class and a joy to listen to. I can do no better than to quote the late great Harry Nilsson who said of David Courtney 'he's the English Phil Spector'. With you on that Harry.

Angel Air's new 2 CD set brings together the best of these richly rewarding collaborations, including Sayer's 'Long Tall Glasses' and 'One Man Band', and Faith's 'I Survived', the latter track featuring no less a luminary than Ritchie Blackmore of Deep Purple fame on lead guitar.

...the guest list across the album also includes Ritchie Blackmore, Brian Robertson (Thin Lizzy), Steve Cropper, David Gilmour, Rod Argent, John Entwhistle, Eric Clapton, Linda and Paul McCartney and Ray Parker Jnr! However shining brightest are the songs themselves, a selection of crafted rock numbers with a pop eye embellished with superb arrangements and the odd touch of strings and brass. The cast list is stellar and there isn't a single performance dialled in, combine that and the aforementioned skilled songwriting and production and there could only be one outcome. Anthology is a fitting reminder of the talents of the one and only David Courtney.

If you like handsome, somewhat commercial songs, then I can strongly recommend this compilation.