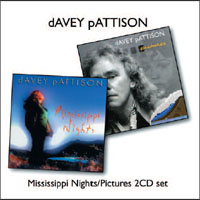 DAVEY PATTISON is a singer with a pretty impressive CV. Lead singer over the years with GAMMA, RONNIE MONTROSE, MICHAEL SCHENKER and ROBIN TROWER and that’s before we list the session work.

Born in Glasgow, Scotland and playing clubs and bars he suddenly in 1972 found himself in USA as lead singer with Gamma. Davey wrote a number of their HITS including ‘Thunder & Lightning’, ‘No Tears’, ‘Razor King’ and their ‘classic’ ‘Voyager’.

In 1986 he got a call from Robin Trower to sing on the’ Passion’ album then in the early 90’s he rejoined Gamma for the ‘Diva Station’ album and a tour to support a ‘Greatest Hits’ set.

‘Mississippi Nights’ the first of his solo albums was recorded in 1999 and the follow up ‘Pictured’ was recorded in 2003 and he called on his numerous friends and contacts to play on these fine albums which have never before been released outside of USA.

In 2004 he rejoined Robin Trower recording the albums ‘Living Out Of Time’ and ‘Another’s Day’s Blues’ and shortly embarks on another world tour with Robin Trower band in 2008. Rhythm & Blues Rock at its best

First UK/European release of these two solo albums from the current Pat Travers band and former Gamma vocalist Davey Pattison. They were first released back in 1999 and 2003, with many of Pattison’s US based musician friends helping out. Both albums are blues based with plenty of tasty slide playing coupled with some songs like 'Daydreaming' and 'Mississippi Nights' sounding not unlike Jackson Browne’s solo work. Pattison also tips a nod to his influences throughout the songs none more so than on 'John Lee Jimmy Reed and Mississippi Fred', which cane be heard on the 'Pictures' album.

Davey Pattison has a lovely, rich vocal style that can easily switch between blues based numbers through to more laid back west coast AOR numbers. Definitely of interest to blues and Jackson Browne fans plus of course Pat Travers many fans. Informative sleeve notes make for a great package overall. ***1/2

The Rainbow show captured them in all their fiery glory...Classic rock come back to conquer anew

...these are very strong records, on which Pattison mixes some of his favourite styles: blues and soul.

"Mississippi Nights" has one highlight after another...'Pictures' is every bit as consistent, although it leans more towards pure blues...

...if you want to hear the full versatility of his voice, this reissue of both his solo albums is the one you want to have.

...bluesy guitar based rock which reflects his work, not only with Robin Trower, but also previous career points with Gamma, Ronnie Montrose and Michael Schenker. Two quality albums from a fine, underrated rock vocalist

That's quite a reputation to be a choice singer of Robin Trower, Ronnie Montrose and Michael Schenker, but if that implies Davey Pattison's up to hard rock belting out, it's not the case with the Scottish singer's solo output. There's a boogie lava in "Have A Look At Yourself", the opening cut of Pattison's debut, piano and slide guitar oiling the rails for the voice to roll on, slowly but surely. This swampy ride, which gains weight in "Judas" from the edgier "Pictures", is engaging, and it's impossible not to be taken with the Stax-styled brass-splashed glide of "I Got The Hots For You" or "Daydreaming" where Davey fills Otis' shoes on what feels like a sequel to "Dock Of The Bay".

Where Paul Rodgers who Davey sounds like in the humid "Too Hot To Sleep" and upbeat "Waiting As Fast As I Can" usually goes urban, Pattison takes a country lane, like in the harmonica-adorned "John Lee, Jimmy Reed And Mississippi Fred" and "Houston Street Blues". Yet he can turn steely brooding, too, as in the sax-guilded "Gypsy Woman Got The Blues", and mischievous in the hush tones of "Mr. Henpecked", while the folk evergreen "WIld Mountain Thyme" takes the singer back to the glens - and points to the place where his all-encompassing heart really is.

......two solo albums released in 1999 and 2003. The former's soporific, laid-back Californian soft-rock is contrasted by the latter's more forceful collision of blues and rock.