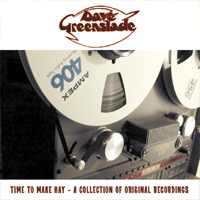 DAVE GREENSLADE the English keyboard player who had his own eponymous band GREENSLADE as well as being a founder member of COLOSSEUM has been back into the studio to remaster the original recordings he made in the period from 1979 to the mid 90’s which were then re-recorded and released as Greenslade, Colosseum or solo album tracks.

These original tracks never before released mostly written by Dave even feature his own vocals as well as playing all the instruments himself.

Angel Air's latest anthology showcases a fascinating selection of unpolished demo recordings from the prog-rock keyboards ace, including some pieces which would go on to grace future Greenslade and Colosseum albums and others which have never seen the light of day until today.

Fans of Greenslade and Colosseum will find this interesting and for the uninitiated, there's certainly enough here to encourage further exploration of the works of Mr. Greenslade and his friends.

My favourite track is the more progressive sounding instrumental "Koblenz" which benefits from Dick Heckstall-Smith's saxophone and an enjoyable symphonic arrangement that at times has a Parson's feel. The moody blues of "Blues In The Night" is also enjoyable highlighted by Greenslade's stellar keyboard work. The title track is another winner with its uplifting orchestrations and feel good sound.

First a bit of history for those who don't know. Dave Greenslade is a keyboard player who was a founder member of the band Colosseum, and he had his own eponymous band that was mainly active in the 70s. These original tracks, written between 1979 and the mid-90s have never been released before, and feature his own vocals as well as him playing all the instruments (bar tenor sax played by the late Colosseum member Dick Heckstall-Smith). I have been a Dave Greenslade fan since the early 1970s when, for my third ever gig, saw the superb Greenslade live at Birmingham's Town Hall. From then on I was a fan for life.

These are one man recordings featuring Dave on all instruments and vocals. Nine well-conceived songs that have that nice cool feel of music that was probably made without the confines and restraints of a clock ticking away in the background. A pleasant musical universe where progressive rock meets mature adult pop. An interesting look behind the scenes.

This intriguing collection is made up of nine preliminary studio recordings, some of which would later emerge as the basis for pieces used in particular Dave Greenslade roles - whether he was composing and playing keyboards as part of the jazz-rock ensemble Colosseum, masterminding the prog band Greenslade or putting out solo albums released simply under his own name. It's a rare chance to peep behind the curtain at a combination of fulfilled ideas and works-in-progress.

Still, 'Koblenz' didn't need words to be touching, although they color its final result, COLOSSEUM's 'I Could Tell You Tales', as Dick Heckstall-Smith's sax solo does most expressive talking on the original recording, one harking back to Greenslade's other band's oeuvre without sounding dated...Such a charting of Dave's back story requires much more investigation, and possibly a box-set treatment, and it is time indeed to reassess his contribution to popular music.

The album has a 'summer music' feel, mostly calm, gentle, melodic, as if moved by a gentle breeze - just beautiful. Occasionally, for example, if at the only time on the CD, another musician may contribute something, it will become gently jazzy. A CD, which should be given on prescription in these times of stress.