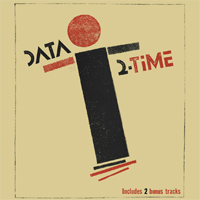 GEORG KAJANUS is a Norwegian composer, singer/songwriter and lyricist best known for writing the hits “Glass Of Champagne” and “Girls Girls Girls” for his band SAILOR. After the break-up of Sailor, Georg came up with the idea of forming a group that would use events as lyrical source, which he then decided to call DATA. Added to that he was dying to work with female vocalists for a change.

Having released their debut album “Opera Electronica” in 1981 to great acclaim the band went back in the studio for the follow up and “2-Time” was released in 1983.

Georg has digitally remastered the album and added as bonus tracks “Living Inside Me” (Razormaid mix), which was very popular in the 80’s club scene in USA, and a 2017 remix of “Romy Haag” by legendary Dutch remixer/producer MATT POP.

...now, once again, the music has been made available for all to hear...thanks to the folks at Great Britain's Angel Air label. With the continued interest in early electronic pop music, Data just might be a band that's ripe for a resurgence.

If the band's debut was a trade-off of catchiness against electronica, so 2-Time again tried to marry the two not always ready bedfellows. Even with both Kajanus and Frankie combining on vocals, the reduced role of Phil proves a key difference as Data's sound evolved, the brightness of before cashed in for a more stark, serious attack that verges into austere. In many ways it makes this second outing feel much more grown up, especially when combined with less dazzling and bright synth sounds.