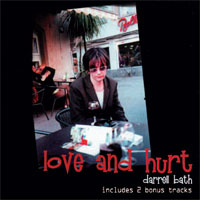 DARRELL BATH – CRY BABYS/IAN HUNTER guitarist with a rootsy/bluesy swagger – is known throughout the world not only for his unique guitar playing but also his excellent songwriting skills (he wrote ‘Never Trust A Blonde’ which he sang and featured on the classic Grammy nominated Ian Hunters Dirty Laundry album from the 90’s) ‘Love And Hurt’ with two bonus tracks was Darrell’s first ever solo album released originally in 2001.

Now remastered with the very rare ‘Flight 505′ from the ‘We Love You’ Stones tribute album included it highlights Darrell’s considerable singing, playing and songwriting skills.

The folks at Angel Air give this one the royal treatment...The tunes...have a nice, loose, spontaneous feel that is particularly inviting...

Darren Bath is a British secret weapon when it comes to that rare breed of guitarist who can be rough and elegant at the same time. Which are, of course, the inherent properties of pub rock, that half-missing link between the art and punk currencies.

It's heavy on deliberate vocal Dylanisms peaking with the jolly ride of "Gimme A Choice", the "Still Learning" jelly roll and the romantic "Sweet Warm Lover" where Hugh McKenna assumes Al Kooper's organ duties, while the voice and guitar work make "Bit Of Your Pride" feel like Lennon-Harrison track that no one knows of, and "To Die For" has a genuine public house swagger about it.

Downplayed this record might be but it's a little gem to fondle. 4/5

This is an album recorded in 2001, which leers, stumbles and smiles withy a wine bottle in its hand, where the country side of the Stones meets the Faces for a night out

...this highly enjoyable album has the feel of a mid to late Dylan recording. It is played 'live' in the studio with an honest air of unpredictabili8ty and immediacy.

Think Bob Dylan meets Keith Richards meets Johnny Thunders...If you're a classic rock fan who's into soulful, grimy sounds like The Faces and Mick Taylor-era Stones then Love and Hurt is definitely one of those records to add to your collection

Darrell Bath must be a sponge like absorber of influences from the pantheon of post-war guitar music, from the Faces to the Travelling Willburys...

This solo-offering is indeed a decidedly 'retro-vibe' affair, performed by an artist par excellence, and who knows a thing or two about old school blues 'n' roll. The songs are strongly roots-orientated, and the album's charm lies in the fact that it succeeds in transmitting that certain "let's play some intimate music in the dingiest hole in town" feel. What we get is a little treasure that ought to be resurrected time and time again, take my word for it! Then again, never trust a blonde...