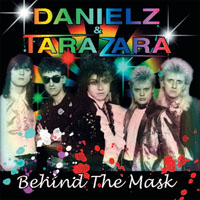 DANIELZ & TARAZARA were formed in 1984 out of the ashes of numerous musical influences (T.Rex, Queen, Thin Lizzy, Sweet and Whitesnake) and they found in DANIELZ a lead vocalist who for a short time in 84/85 became the darling of the rock music press ‘Sounds’ and ‘Kerrang’.

The band began touring around the UK playing support to GARY GLITTER and EDDIE & THE HOT RODS as well as key London dates such as The Marquee, Dingwalls and The Embassy. Two record companies were courting them the first being the mighty Atlantic Records, the second independent FM Records and the band aimed high and went with Atlantic and needless to say, the deal fell through at the last hurdle and by that time they had let the independent slip through the net .

So the album recorded in 1984 for that elusive deal is now released for the first time ever with quotes from the time such as ‘This guy is a total trip, an ego on stilts’ Malcolm Dome-Kerrang. The band called it a day in 1986 even though they performed on Channel 4’s ECT, had testimonials from RITCHIE BLACKMORE they still had no deal.

DANIELZ has for past decade and a half been fronting T.REXTASY one of the most sought after tribute bands in the UK today

...the emphasis is on melodic rock and there are indeed some catchy tunes amongst the 15 tracks...

Musically, their sound was like a cross between Sweet and Bon Jovi ... catchy, straight ahead hard rock songs that placed an added emphasis on delivering heaping doses of soaring vocal harmonies and hook laden melodies.

The history of rock is littered with bands that with hindsight deserved much better than they got, but thanks to the likes of Angel Records we are now beginning to get a chance to assess which ones really should have been household names. Judging by the nine studio tracks and two live songs, Tarazara were one of those that should.