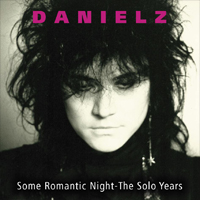 DANIELZ recorded this album at the end of the 80′s after his band TARAZARA had split (the darlings of the rock music press in 84/85 including SOUNDS and KERRANG) and before he formed his T REX tribute band T.REXTASY which over the past 20 years he has created and maintained one of the most sought after tribute bands in the UK.

“Some Romantic Night” has some outstanding tracks which give a nod in the vocalisation lyrical content to MARC BOLAN. Danielz assembled a stellar cast of musicians to record the album including Tom & Tim Farmer (BLACKFOOT SUE), Paul King (MUNGO JERRY), Lindsay Bridgewater (OZZY OSBOURNE BAND) and Ced Sharpley (GARY NUMAN).

...the album earns a revisit by drawing from Bolan's lushly melodic guitar style and Dylan's distinctive vocal delivery (a reference highlighted by the bonus cover of 'Stuck Inside Of Mobile'). Mixing in the influences of those '70s icons with some decidedly '80s production and saxophone breaks, it throws up some irresistibly hooky glam-pop gems.

As for the four bonus tracks, these are acoustic home recordings and they certainly bear a nod (or two or three) to Marc Bolan! However 'I'm Living In Dreamland' and 'Hermaphrodite' ('Are you a he, a she or it, baby - not everyone can handle it') not only bears the hallmark of Bolan but of course, of Danielz through and through.

We are furthermore treated to two cover versions, of which the first is 'Celluloid Heroes' by The Kinks, and the second is Bob Dylan's 'Stuck Inside Of Mobile'. Surprise surprise, these tracks too are played in a Bolan-esque style (singing / guitar-play) and it works incredibly well.

'Some Romantic Nights' is not only a must for fans of Danielz but for fans of quality music and inspired lyrics.

Even brighter, 'Don't Need A Reason' comes in as a sweet slice of groovy pop with a disco inflection, but there's depth to 'Woman In The Gallery' that, its silver funk lining aside, harks back to classic '60s soul where harmony was king.

All this goes to show that a new original album from Danielz is long overdue. Time to notch that elusive hit. ****