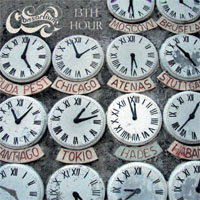 CONSORTIUM made the UK Top 30 singles chart back in 1969 with ‘All The Love In The World’ and then broke up eventually in 1975. Angel Air released their previously unreleased 1975 album ‘Rebirth’ back in 2006 which has enjoyed considerable worldwide sales with no less than 4 of that albums tracks being featured in films over the past 3 years.

Following on from ‘Rebirth’s’ success the band has reformed and recorded a new album. The title track of this brand new album ’13th Hour’ has already been placed in the soundtrack of the skateboarding film ‘And Now’ which goes on release in early 2010.

...heavy progressive atmosphere...the album feels like a stately ghost from the past, fleshed out gloriously and very much alive for all to marvel at.

Drummer John Parker died in 2001 and the rest of the band, on finding these precious recordings were determined to complete their legacy by releasing these recordings in homage to their dead friend. There can be no finer tribute to an old muso than this.

...nine tracks...that celebrate Consortium's mid 70's classic rock sound, so there is a pleasant retro feel permeating throughout the album...If you like classic rock that has elements of prog, folk and west coast American pop you should definitely check out what Consortium has to offer...

Where most of their contemporaries fumble at summoning times past as they creak back onto the road in the 21st century, Consortium sound as credible as creative rock force as they were in their heyday on the strength of this Tardis of an album. Tour dates? 4/5

PROBABLY THE BEST EVER ALBUM RELEASED BY ANGEL AIR...

I have heard every album released by this label - over 300 separate albums in total...and this is possibly the best of the bunch. This is prog rock at its most classy, intelligent, dynamic and clever. The songs are superbly constructed, catchy, well written and in a league all of their own. What is more, they sound like a fresh new band rather than a cluster of ageing rockers! Superb!

...anybody with fond memories of the original band will have no trouble recognizing the ingredients, a quality that renders 13th Hour a stunning addition to the old collection

...hugely enjoyable. It has that distinctively plodding heavy/proggy sound...and is a wonderfully nostalgic listen