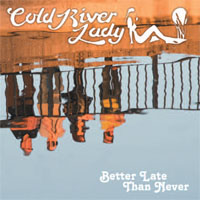 COLD RIVER LADY were discovered by PETE BROWN (who wrote the lyrics for CREAM’s major Hits ‘Sunshine Of Your Love, White Room’, I Feel Free’) in the spring of 1971 and he was very taken with CRL’s song writing efforts and offered them a publishing deal with his company. Over the next few years Pete worked with the band producing a number of demos and encouraging them to turn full time professional.

The band got a residency at The Greyhound, Fulham, London then went off to Europe to tour but they never got that elusive record deal and the band disbanded in 1976. In 1991 Pete formed his own production company (Interoceter Records) and asked the band to reform to record an album and ‘Better Late Than Never’ is the result of that reformation producing an album ‘that has a strong folk influence, but sophisticated flavours from the likes of Arthur Lee, Tim Buckley and Caravan were also present in the mix’

Better Late Than Never- a gem of an album.

Listening today to the quality of material contained in this impressive and refreshing album I can fully understand Pete Brown's, Duncan Ferguson's, and Peter Purnell's faith in the band...

Musically it is very pleasant pop meets rock and vocalist Helen Hardy has a soothing voice perfect for the music. In fact songs like 'The Promise' and 'Hereford Girls' reminded me of Mostly Autumn.

Musically the vibe here is a fairly laid back affair with a straight ahead rock approach and a noticeably English flavor...a top notch effort from beginning to end.

Musically it is very pleasant pop meets rock and vocalist Helen Hardy has a soothing voice perfect for the music. In fact songs like 'The Promise' and 'Hereford Girls' reminded me of Mostly Autumn. Not essential by any means but worthy of further investigation. 3½/5

A collection of semi-acoustic melodic rock, theirs is a quintessentially British rock sound that will appeal to fans of Camel, Caravan, and the Canterbury Scene.