CHRIS SPEDDING Just Plug Him In 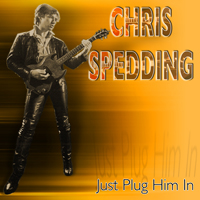 CHRIS SPEDDING is best known for his UK hit ‘Motorbikin” as well as his membership of SHARKS but in reality he is a widely acclaimed English rock and roll and jazz guitarist described by many as one of the UK’s ‘most versatile session guitarists’ playing with BRYAN FERRY, ROXY MUSIC, ELTON JOHN, JACK BRUCE, NICK MASON and KATIE MELUA.

‘Just Plug Him In’ was released originally in 1991 and features live tracks from 1977 to 1989 and the album was lovingly complied by CHRIS SPEDDING from master tapes of various gigs over that period. The album kicks off with tracks from 1977 when he did a UK tour to promote his album ‘Hurt’ then to 1981 and finally tracks recorded in New York to tracks recorded in Baltimore, Maryland in 1989.

Now remastered with the blessing of 21st century digital editing and mastering techniques. The album itself highlights the talents of Chris on guitar and vocals as well as great supporting musicians. The result as you will hear is some very spontaneous and exciting music.

...Chris Spedding could be perceived as a British Link Wray...There's the same punky menace in his solo hit 'Motorbikin'' that's in the heart of this 14-track live collection...

...a no holds barred assault from start to finish that will definitely be a wet dream for any serious guitar player. For almost an hour the listener is made to feel like they're right there in the crowd soaking up the electric spontaneity emanating from the stage...

On tracks such as 'Walkin'' and 'Music Breakout' , both recorded here in 1977, you can hear the influence that Spedding has had on not only the young punk guitarists, but also on a generation of post-punk players.

For a guitarist who's solo career never really achieved the status it should have done, 'Just Plug Him In' is a good document to one of the UK's most underrated players.

...one of the best and longest-serving guitars-for-hire in the business...Spedding's expertly dispensed guitar pyrotechnics spark up contagiously...

Re-mastered from Chris' own master tapes, with hand-picked tracks all played by one of the best, this really can't fail to get your pulse rate jumping...

...a no-holds barred assault from start to finish...For almost an hour the listener is made to feel like they're right there in the crowd...

The highly regarded rock and jazz session guitarist is in sprightly form throughout...