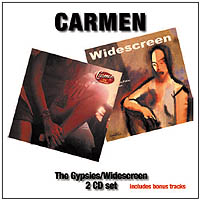 CARMEN with its unique, avant-garde fusion of roots flamenco and rock first appeared on stage at El Cid Night Club on Sunset Strip, LAin the early 70’s before basing themselves in the UK. Having released their first two albums ‘Fandangos In Space’ and ‘Dancing On A Cold Wind’ (released by Angel Air in 2006 as a 2CD set SJPCD229) the band went back to the USA as supporting JETHRO TULL in 1974.

After the 44 date tour they went to Massachusetts where they recorded their final album ‘The Gypsies’. Fast forward 20 years and band leader DAVID ALLEN commenced work on ‘Widescreen’ which has occupied David for the past 10 years and is now released for the first time.

There are elements of Queen and Jethro Tull in the music and arrangements, but the nearest musical comparison is Babe Ruth Carmen were, in the main, genuinely trying to be different. Santana fans could do worse.

...the second CD of the set...is pleasant as background listening...Widescreen modernly fuses the Spanish music that is at its core with gentle electronic, mild jazz, and even a bit of funk (7.5/10)

Widescreen, the second album in the package, is not strictly a Carmen album; rather, it revives a solo project that occupied frontman David Clark Allen through the 1990s, an instrumental work that dances across many of the same pastures that Carmen bestrode with such joy, but shot through with so many other musical experiences that it really does feel like the old band is back