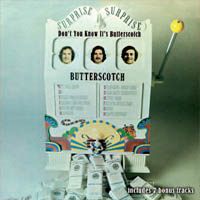 The song writing/production team of Chris Arnold, David Martin and Geoff Morrow has written some classic tracks over the years including “Can’t Smile Without You” for Barry Manilow and songs for artists such as Billy Fury, Cliff Richard, Cilla Black, and Edison Lighthouse to Elvis Presley.

In 1970 having enjoyed considerable song writing and production success via their AMMO production company they formed BUTTERSCOTCH and had immediately a UK Top 20 hit single with “”Don’t You Know” which spent 11 weeks in the charts. The follow up single “Surprise Surprise” charted in Japan.

Now available for the first time on CD the “Don’t You Know It’s Butterscotch” album with 7 additional tracks that were originally only released as singles.

Never released before this CD contains all their recorded material, they never bettered DYK and didn't trouble the charts again but if you like 'Sunshine pop, harmony ala Harmony Grass style there is much to enjoy 'Surprise Surprise' and 'Sunday Wont be Sunday Any More' being two highlights. And as aforementioned you'll be humming DYK for the rest of the day!

This CD brings together the album and a handful of As and Bs...You could call it "Butlins Psych" - British Bubblegum with chart potential; songs Cliff, Cilla and Tom would feel comfortable belting out. 'Things I Do For You' and the follow-up single 'Surprise Surprise' evoke a family holiday to the Costa Brava, 'Office Girls' is pure '68-vintage Cat Stevens, and 'Constant Reminder' is catchier than Chlamydia.

'Constant Reminder' is a perfect, if straight-faced pop song, while 'Reasons' boogies down as if Roy Orbison engaged Chuck Berry for a jam. Butterscotch's LP still stands as a testament to the trio's tuneful wit.

There's no better way to relive the sound of the early seventies. GET THIS! Highly recommended.

As might be expected from such well established writers...the record was made up of some very enjoyable compositions, many of which sounds nicely half-familiar even on first listening.