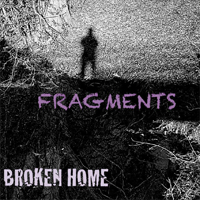 BROKEN HOME were formed from the ashes of MR BIG by DICKEN and they released during the ’80s two albums “Broken Home” and “Life” (which included the track “Oh Yeah” which is a classic in Scandinavian territories).

At last Dicken has created the third album from the group which fans have been seeking for years. Classic AOR rock from a gifted singer/songwriter and his band.

Still, reflection and rumination, and sometimes religion, are never far from the album's agenda, yet while the six-strings-elevated, intimate detail in "Lovely Ann" - dedicated to Dicken's late love - feels bittersweet, the organ-anchored "Ship Without A Sail" has an optimistic angle to it, sharpened even more once "Summer It Won't Be Long" is streamed into a calypso-esque drift. With boogie bolstering the swagger of "Spirit" which would sound great on-stage, the melodic appeal zeal of "Fragments" couldn't be more irresistible - only a pop drive behind "Danger" will tie the individual and global aspects together. And this is only logical, because everything is fragile, and if we're careless, we're bound to be left with pitiful fragments, with BROKEN HOME's last album a testament to better times. ****

Broken Home were formed from the ashes of (the British) Mr. Big by DICKEN and they released 2 albums during the '80s: 'Broken Home' and 'Life'. After a very long wait the third album is now available. As well as Dicken, Broken Home comprises Eddie Carter, Paul Gibbons, Simon Saunders, Peter Crowther, Mike Higgins and Pete Barnacle.

"When You're Young" kicks things into gear, an almost 80s Americana feel melded with something much more stage-show in nature. It's a beautifully constructed piece of pop-rock and with a melody line that'll stay with you for a long time to come. However, the confusion of approaches comes thick and fast, with the howling "Rebel Children" much more of a rock strut and preen, even if, as is the case throughout, the lyrics are much more threatening and stark than the music might suggest.

...Each and every song possessing at least one aspect that truly catches the imagination, whether that be the bluesy shuffle scuffle of "Spirit", the jingle-jangle strum of "New Adventure" or the smooth slick 70s harmonies and vocals of album highlight "Turn All Your Troubles Into Highways"...if you're looking for sharp observational lyrics and equally sharp, if maybe slightly too diverse for its own good, pop rock, then you'll find much to delight you here.