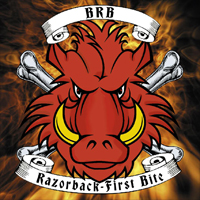 BRB were a mini rock supergroup that somehow never happened back in 1987. DEL BROMHAM (STRAY) and GORDON ROWLEY (STRIFE & NIGHTWING) had discussed Del joining Nightwing which Del declined but after striking up a good relationship with drummer STEVE BARTLEY (Nightwing) they all got together to record an album they planned to release under their new band name RAZORBACK.

Luck was not on their side as Gordon became seriously ill after recording the album and it was shelved until an opportunity arose. No one expected it to take 37 years for it to surface and for a band to exist already with the name RAZORBACK!

Classic rock from the masters.

'Good To Be Alive' and 'Angel Love' in particular have plenty of bite alright, both tracks coughing up attitude aplenty. Closing track 'The Book' is raw, dead cool, and has considerable bite!

The album is a little classic that took 37 years to surface after it was first recorded - which makes it all the more precious.

...And then comes 'The Game,' the album's best moment - unhurried yet hitting hard and cutting deep - and 'The Book' that smears a mandolin over a catchy stomp. Quite sharp and snappy: a pity, this bark is only a distant echo now. ***1/3

...this is top-notch stuff. 'Here I Go Again' could be from Stray's 'Stand Up And Be Counted', 'The Book' has one of those perfect Bromham solos, and the rhythm section keeps a thick, brutal sound throughout. If you're lucky enough to still possess greasy, shoulder-length locks, this is music for flailing them around!

As a late '80s collection of bluesy hard rock, Razorback-First Bite fares pretty well. A few of the tunes might classify as filler to some, but there are still plenty of strong rockers here to make this a worthwhile CD to seek out for any Stray or Nightwing fan. Angel Air has also included a cool booklet with plenty of info on both bands and how these three came together to make this album, plus photos. Another great archival release.