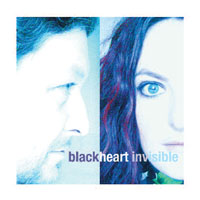 BLACKHEART are a new band consisting of CHRISSY MOSTYN and RICK PILKINGTON and are hailed as one of the most exciting British song writing duos of the last decade. They are currently touring the UK with a band that includes Andy Collins and Brian Thomas (THE STORYS) and Simon Davies (RACING CARS).

The band has released one album previously (their outstanding debut album ‘Indigo’) and their new album ‘Invisible’ features commanding heartfelt songs all superbly performed and sung. Their song writing blends folk, country and even rock influences to create a unique style of beautifully crafted memorable songs.

They are regularly played on Radio 2 (Song Of The Day Fathers Day 2008), Aled Jones Show and have had songs featured in TV commercials and their last single reached Number 1 in the NCM Euro Chart last Christmas.

It flows in with an urgent ring of "Wednesday Afternoon" that's increasingly endearing and flies out with the embrace of title track where the duet's voices strip bare their admirable vulnerability, but its real strength hides between the bookends. While "The Town Of Maybe" paints a jolly picture of lovers deep in doubt, the countrified majesty of "Farewell" followed by the delicate "Goodbye Everything" makes the parting play too big a role in the emotional whole. But it's a bittersweet cup one will hardly refuse to drink from, and there's no chance to stand against the drift of the piano-led and strings-awashed slow-burning "Flyaway" and, even more so, "Thank God You Found Me".

With songs like these, for BLACKHEART invisibility is not an option anymore. ****1/3

From the jangly, female fronted pop of 'Wednesday Afternoon', to the sparse 'Thank God You Found Me', the lively string-led 'Farewell', through to the haunting title track 'Invisible', the whole album is an easy to listen to affair. 'Lochelly Lives' is reminiscent of The Corrs, whilst 'Names In The Rain' is sung by guitarist Pilkington and therefore nicely changes the flow of the album.

...it's hard to ignore the fact that they possess a definite knack for crafting songs with memorable and uplifting melodies...If the lighter sounds of folk, pop rock are up your alley then you should definitely check out what Blackheart are doing on Invisible.