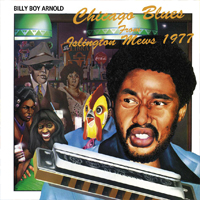 BILLY BOY ARNOLD and The GROUNDHOGS It happened during the autumn in London in 1977. Billy Boy was touring Europe and entrepreneur Peter Shertser came up with the idea that Billy Boy should record an album with The GROUNDHOGS at Pathway Studios, West London.

Billy Boy gelled immediately with the white boy’s blues rock of The Groundhogs and jammed with the band until they were tight and ready to record the album. And what an album with Billy Boy’s singing and harmonica and Tony S McPhee’s slide technique and outstanding licks.

As one reviewer said back in1979 “Briefly and simply, this album contains some of the best blues of the 70′s and some of Billy Boy Arnold’ best music ever.”

This album has become somewhat legendary over time...so fans of British blues rock will definitely want to get their hands on this one. In addition to the twelve cuts that appeared on the original album, this CD also features three bonus tracks ("It's Great To Be Rich," "Just A Dream," "Catfish"). This should be instantly appealing to fans of Jimi Hendrix.

The performances on Ah'W Baby, Eldorado Cadillac, Just a Dream and Catfish not only exemplify a true Chicago great at his best - they also give you a warm, nostalgic taste of an exciting time in British blues, as it punched through the tail-end of punk hell bent on survival. Buy it, turn it up, (right up) and you'll dance - I guarantee it.

If you want a taste of down on your luck blues look no further than 'Blue and Lonesome', slow paced and down beat, and if you want more lively fare 'Eldorado Cadillac' has a touch of rockabilly and Bill Haley about it.

This release also includes three bonus tracks including the furiously paced 'Catfish' and is packaged superbly with sleeve notes explaining how this recording came about. If you enjoy your blues this one is for you.

The Calvin Carter cover 'Eldorado Cadillac' is bursting with a stonkin' Muscle Shoals sound, cranked up by the flaming licks and rhythm of The Groundhogs, and immaculately held together by Billy Boy's classy blues voice. 'Mary Berenice' boasts a fantastic blues rock rhythm ... a bit of boogie, a little honky tonk, plenty of soul and a general Southern rock vibe.

A sublime album, and justly regarded as one of Billy Boy Arnold finest moments!

...“Sweet Miss Bea”, as polished as it comes, rumbles quite infectiously, with all the bells and no whistles in McPhee’s solo, whereas Little Walter’s “Blue And Lonesome” catches Arnold in his most lachrymose mode and overlaps lyrically with the sped-up and unison-driven “Catfish”, one of the bonuses here, the real gem of which is “It’s Great To Be Rich”, where BB’s harmonica reigns and runs amok. Talk about right place and time, then.