BILLIE JO SPEARS We Just Came Apart At The Dreams 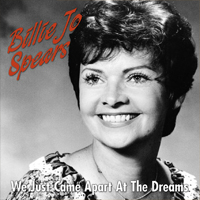 By the time the UK “discovered” BILLIE JO SPEARS she had been a country chart regular in her native USA since 1968. By 1975 she had arrived with her chart topper “Blanket On The Ground”.

Billie began touring the UK regularly from the early ’70s onwards and in 1982 in London she recorded much of the material on this album with the final tracks recorded in Nashville. The album was released the following year in 1983 on vinyl only and this is the very first time it has been released on CD.

Billie died in 2011 but her music and legacy lives on.

Billie began touring in the UK regularly from the early '70s onwards and in London on 1982 she recorded many of the tracks on this album, the remainder being completed in Nashville. The album was released the following year on vinyl only and this is the first time it's been released on CD.

Of course, there's blustery bluegrass in "Baby On My Mind" yet there's also rockabilly in it, and Spears' allegiance to country is limited to the choice of covers here, because "Can't Change My Heart" and "Ain't No Money" which bookend the album are transformed into contemporary pop, these catchy pieces disco groove stressing the strength and the gloss of Billie Jo's vocals. She easily makes "Blowing Away" her own without ever casting a glance at Linda Ronstadt or Bonnie Raitt's versions of the perennial, while the tender title track has seen a slew of performers following in BJ's wake, So pedal steel may wail in "Love Dies Hard" where the chanteuse's inspired delivery is full of hope, but the same instruments in Chuck Berry's "You Never Can't Tell" help Spears display her smile and style in the most charming manner.

If BJ's punchy take on "Settin' Me Up" validates Mark Knopfler's prairie approach to writing, "Too Far Gone" finds her tap into Southern sort of strings-drenched sadness, and "Sweet Dreams" is perfect alloy of Spears' traditional leanings and the period production. Short and to the point, this record is ripe for rediscovery because, 30-odd years since its release, the album is still fresh and fragrant. 4½ / 5 Stars

This release will be of genuine interest to Billie Jo Spears fans because...this marks the first time these tracks have ever been released on CD. Recorded in 1982 in London and Nashville, We Just Came Apart at the Dreams was originally released on vinyl in 1983. By this time, Spears was experiencing a good deal of success in England. The tracks on this album present a more middle-of-the-road sound and style. It features covers of songs written by a number of well-known artists including Rodney Crowell, Don Gibson, Chuck Berry, Mark Knopfler, and Jim Weatherly & Bucky Jones. Sadly, after a long and lengthy career, Billie passed away in 2011. This reissue will help to keep Spears' songs and spirit alive for decades to come. Spirited upbeat cuts include "Can't Change My Heart," "Baby On My Mind," "We Just Came Apart at the Dreams," and "Ain't No Money."

...up tempo selections include a charming countrified revival of 'You Never Can Tell' - Chuck Berry at his most wordy, which like that of The Cate Brothers' soul-inflected 'Can't Change My Heart', nestles comfortably enough among unhurried heartbreak ballads like 'Love Dies Hard', the title song and, perhaps Elvis Costello's contemporaneous overhaul as a useful demo, Billy Sherrill's 'Too Far Gone'.

Recorded in London (but completed in Nashville) in 1982, 'We Just Came Apart At The Dreams' saw but a fleeting vinyl lifetime some thirty-five years ago. This, then, is its first appearance since then, and it's difficult to see why it has remained obscure for so long. Particularly as Billie Joe was still scoring hits as recently as two years before, and would do so again a couple of years later.

Ah, we'll get to that in a moment.

It's a terrific album. The Spears voice is as alluring, powerful and expressive as it ever was, and her choice of material is faultless, too. It's great hearing BJS tear through Chuck Berry's "You Never Can Tell" and a brilliantly revved up version of Don Gibson's "Sweet Dreams" - in and out in under two minutes. Rodney Crowell and Mark Knopfler show up in the writing credits too, with the latter's "Settin' Me Up" an opportunity for Spears and band to really kick some cans around.

But circumstance was less conducive than it might have been. Spears both recorded the album in London and in part relied on local talent for accompaniment. Nothing wrong with that, of course, and in many ways the disconnect from the US country scene is one reason why We Just Came Apart...sounds so fresh today.

Unfortunately, it also ensured that America wasn't interested, while a more-minor-than-most UK record label (Premier) just doesn't appear to have been equipped to give the album the attention it deserved. It vanished, Spears returned to her American career, and three and a half decades later, even fans will probably be hearing this for the first time. Tell them it was worth the wait.