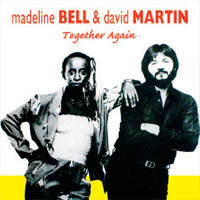 Back in 1981 DAVID MARTIN (who as part of the AMMO song writing team had enjoyed Number 1 Hits the world over with artists such as BARRY MANILOW to GUYS & DOLLS covering their songs) teamed up with MADELINE BELL to record an album for his then fledgling DEB RECORDS. Madeline had shot to fame in the UK in the 70′s as part of a two pronged vocalist team with BLUE MINK and recorded some classis songs such as “Melting Pot” and “Good Morning Freedom”.

David also has Hits himself as part of BUTTERSCOTCH and Madeline has continued to tour the world working with BBC’s Big Band, James Last, Netherlands Metropole Orchestra.

The album “Together Again” was never released although a number of singles were during the period 1981 and 1982-all are included on this release.

...Some of these ten cuts, like the tinseltown glitz of "Walking On Air" sound a tad dated, though the disco jive of "Who's Kiddin' Who", where Madeline's crystal-sharp vocals fly over the finger-popping twang, proves irresistible. The silkier approach to the orchestra-wrapped title track, a duet with Martin, works fine; still, surprisingly, the urban grit in Bell's voice comes forth on the lush ballad "East Side, West Side".

...the emotional peak is reached in AMMO's own perennial, "Can't Smile Without You", sung here in fragile fashion by Josie Martin and her dad David. A pleasant public addition to the master's impressive catalogue. ***