BEAU Edge Of The Dark 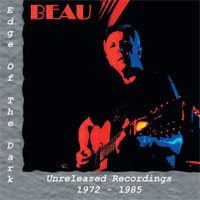 BEAU signed to the now infamous label DANDELION RECORDS in 1968 and in July 1969 was the very first artist to release a single on the late JOHN PEEL’S fledgling label ’1917 Revolution’ making it to the Number 1 slot in Lebanon!

Two albums followed ‘Beau’ in 1969 and ‘Creation’ in 1971. In mid 1972 Beau and The Way We Live (now renamed TRACTOR) went into the studio to record his third album provisionally titled ‘High Mass’. Dandelion then folded and the recordings from that session have sat in the can until now.

The five tracks from that 1972 session are on this release as well as tracks recorded by Beau from the period 1975 to 1985.

In his 1976 book ‘Electric Children’ JACQUES VASSAL wrote ‘probably the most neglected songwriter of all is Beau’. We could not have put it better. JOHN PEEL however said ‘A remarkable writer and performer of songs and well worth listening to under any circumstances’

To our ears, his music sounds something like a cross between Donovan and Bert Jansch...His songs are based around a simply strummed acoustic guitar and he has a nice, subtle, underrated voice...Damn, this guy is good 5/5

...a wonderful disc of acoustic beauty. A potent talent too long neglected, Beau may now finally get his due.

(John) Peel called him "a remarkable writer and performer"...

I have to admit that folk music generally doesn't make its way into my regular playlists that often, but I'm definitely making it a point to keep Edge Of The Dark set aside for that next rainy Sunday

...a masterful guitarist on the twelve string, a subtly nuanced singer and a strong songsmith who, with few means, put enchantment into penetrating (or impressive) folksongs, which also point to underlying Blues/Rock moments. A valuable rediscovery!

...we can appreciate someone who John Peel said was a outstanding composer - good to listen in all circumstances...This album is one to be listened to when you have time to think and let the pieces of the Jigsaw fall into place ... Beau is undoubtedly an artist to rediscover and this is a first choice compilation that will undoubtedly please folk fans and other music lovers. (***1/2)

...an acoustic performer who plays a 12 string and makes a lot of his delicate voice, subtle and understated, with an ability to pen some good songs, the man never managed to reach the audience he deserved and here's a chance to rectify that.