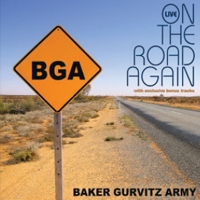 On a regular night of drinking and sitting in the clubs restaurant myself and my brother sat on a table with Ginger Baker and point blank asked him if he wanted to join our band, and his response glaring at us with no front teeth said “what band” we said “us” to which he replied “who are you” which was a typical Ginger response he knew very well who we were as we had played a show together and had a confrontation and almost a fist fight with him.

Ginger was recently back from Africa and was not playing with a band at that time and after a few more drinks he agreed to come to our rehearsal room and jam with us. It was an immediate reaction from all of us that this was a great combination, the next day we checked in to Ramport Studios which was owned by The Who and where we had recorded The Three Man Army albums and that was the beginning of BGA.