AZTEC TWO-STEP The Times Of Our Lives 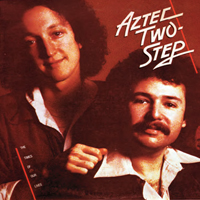 Formed in 1971 AZTEC TWO-STEP is an acoustic soft rock duo. They were a regular on the folk festivals circuit in USA for decades to follow and they have released over a dozen albums.

The band members met on an open stage at The Stone Phoenix in Boston and within a few months of working together they recorded their first album as a duo.

They are noted for their longevity and they received New York Music award for best folk album in 1986 and have performed on TV and Radio in USA. In 1999 a documentary about the band aired on PBS called “No-Hit Wonder”. “The Times Of Our Lives” was released in 1979 after being recorded in Nashville, Tennessee