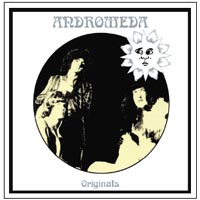 In the summer of 1968 after the demise of his last band THE ATTACK, JOHN DU CANN formed ANDROMEDA. For the next year they gigged up and down the UK at clubs,Universities and prestige London venues such as The Round House and The Lyceum.

Having caught the eye of the late JOHN PEEL Radio One appearances followed. John Du Cann and his colleagues recorded their first album which they presented to their then record company who promptly dropped two tracks (too long for an LP) and remixed it as the original was considered “too heavy”.

The band was gutted and John moved onto ATOMIC ROOSTER – but that as they say is another story.

Presented in the usual top way by Angel Air, and remastered from the 1969 acetates, we get a strong mix of psych, pop, hard rock and prog, with Du Cann’s guitar in fine form.

The music is suitably atmospheric and the hard rock edge makes the psych thankfully less whimsical than much of the era.

More than a curio, it’s well worth checking out if you’re a fan of the era, or of Atomic Rooster, who Du Cann went on to. ***

Although some people are going to seek this CD out just because of the rarity value, it should be sought out because this is actually a strong collection of songs in its own right...They run through Hendrix-inspired romps to things far more delicate, even bringing in layered harmony vocals as if they were The Moody Blues...a great collection of songs that fans of the era would do well to seek out.

...the holy grail for their fans...There's fun to be had, too, in spotting instrumental quotes such as the Holst-via-Zappa riff on the fade of bitty Return to Sanity...

Originals captures the boundary-breaking nature of its decade, whether the music marks the passing of psychedelia, the early stages of progressive, or the expansive expression of power trio heaviness.

...this 10-tracker really does rock...Despite the passing years, the songs still retain a raw freshness and appeal.