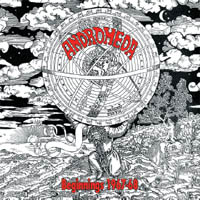 JOHN DU CANN having cut his teeth in the group The Attack then formed in late 1967 ANDROMEDA and devoted his time and efforts to Andromeda’s special brand of psychedelic and progressive rock aided and abetted by his then flatmate MICK HAWKSWORTH (bass) and drummer JACK COLLINS.

The majority of tracks on this CD have never been released before in the versions featured and are drawn from acetates which John Du Cann has had in his personal collection for nearly 40 years. John has overseen the remastering and choice of all tracks.

Andromeda is case of ‘what might have been’ BUT Du Cann was hungry for success and in 1970 he joined ATOMIC ROOSTER as singer songwriter and the rest is history. Andromeda immediately folded.